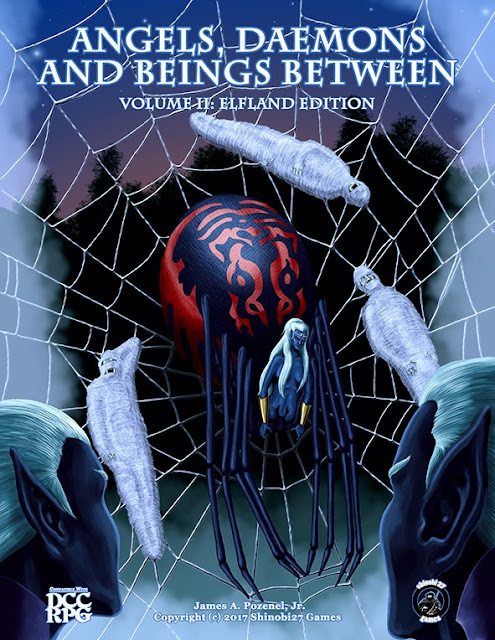 I don't play much DCC RPG these days but I am very excited to see the Angels, Daemons & Beings Between Volume 2 Kickstarter not only go live, but fund in less than 2 days.

Now, in all fairness, I consider +David Fisher (main man behind Shinobi27 Games) a friend and we've talked a decent amount about Angels, Daemons & Beings Between Volume 2 in the days and weeks leading up to release. I can truly say it is a very strong project with well thought out stretch goals (its already hit a few)


Angels, Daemons and Beings Between, Volume 2: Elfland Edition is more than just a sequel to AD&BB, Volume 1: Extended, Otherworldly Edition, it is a project that author James Pozenel Jnr. and publisher/editor/artist David Fisher have poured their creative souls into for over a year. The final product will be a hardback book of approximately 150 pages.

Like Volume 1, Elfland Edition will provide Dungeon Crawl Classics RPG gamers another great selection of patrons to use at their gaming table but with a distinct fae flavor and like its predecessor, Volume 2 requires the DCC RPG Core Rulebook for use (see below). DCC elves are, after all, compelled to have a patron from the beginning and we felt the selection of patrons could be richer for the Elf class. We strove to reflect the varied depictions of elves in mythology and folklore from which Appendix N authors drew upon for their fantasies.

Angels, Daemons and Beings Between Volume 2: Elfland Edition unleashes the hidden patrons of Elfland. From fey barbarians and vagabond thieves to vile demons and alien vegetation, this tome shines light on 13 new patrons of distinct fae character. With accompanying art, spells, spellburns, patron taints and the rituals required to commune with these patrons, this volume is a must for your campaign’s elves… and wizards, of course!