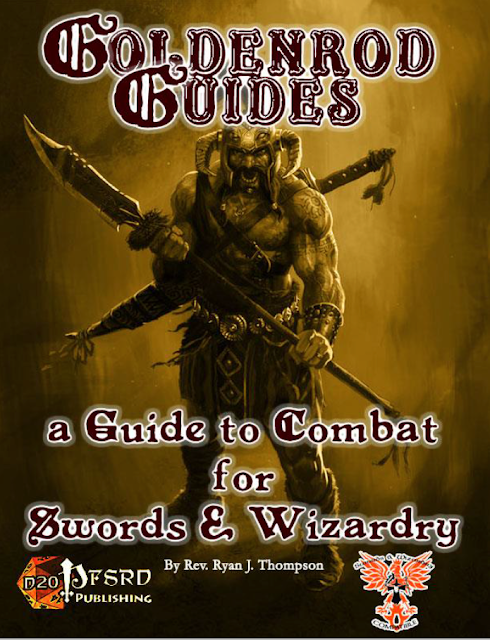 The other night +John Reyst and I got to talking. I've kinda slacked of on doing reviews. John would like some of the OSR products at his Open Gaming Store reviewed. Two needs. Simple solution. So I don't pick titles that I'm predisposed to, John is going to pick the titles (today is an exception, as Goldenrod Guide: A Guide to Swords & Wizardry Combat struck me as fitting fairly well with Ale & Advice column dealing with Swords & Wizardry Combat)

I made it clear to John that the reviews are going to be my truthful feedback and I was going to identify them as being comped copies from the Open Gaming Store. He agreed without hesitation. I'd say it is in John's best interest to pick the better apples for me to review ;)
Goldenrod Guide: A Guide to Swords & Wizardry Combat is written by +R.J. Thompson . If you don't know who R.J. is, he is the brave soul that picked up the mantel of Swords & Wizardry Appreciation Day from me. His system of choice? Swords & Wizardry.

Now, what I'm holding in my virtual hands is optional combat rules for Swords & Wizardry Complete. For those that aren't familiar with S&W Complete, think of it as AD&D 1E, where all the complicated rules that few if any groups used are thrown out. The ease of use of Basic D&D with the class options of AD&D 1e. Some groups bemoan the loss of some of the more in depth rules, sensing a loss of the granularity and options. GG: A Guide to Swords & Wizardry Combat allows one to add some of those options and depth back in.

The great thing about GG: A Guide to Swords & Wizardry Combat is that the options are modular. You can mix and match for the most part without anything breaking. New rules for two weapon fighting, disarming, called shot, unarmed combat, disengaging combat, missile combat, critical hits and more are here as well as weapon proficiencies, weapon specialization and fighting styles. Heck, even tournaments are covered. There literally is something for everyone.

While much will be familiar to the former AD&D player, some is new and almost all is tweaked to better fit the simpler Swords & Wizardry rule set. Its an excellent mix of options to add to your S&W game. There are a lot of content squeezed into these 16 pages. I suggest you stick with adding a small handful of options at a time, see what works for you, discard what doesn't and then move on to more options if you so desire. They do generally add some complexity but they also add flavor and depth to the combat system. The flexibility and modularity of Swords & Wizardry is impressive.

May your gaming never grow boring :)