What follows is the complete press release from Fantasy Flight Games released earlier today. We are keeping the original formatting and the included links. Some of the text by go beyond it's allotted space, and for that we apologize in advance.

It will be interesting to see where the license(s) go in the future.

In 2008, Fantasy Flight Games first began publishing great games set in the amazing Games Workshop universes. From the earliest days of the partnership, Games Workshop played a key role in the Fantasy Flight Games library, helping us further develop roleplaying games like Dark Heresy and Warhammer Fantasy Roleplay, while creating and establishing new board games like Chaos in the Old World and Forbidden Stars, and Living Card Games® such as Warhammer 40,000: Conquest and Warhammer: Invasion.
Games Workshop has been a fantastic partner for the past eight years, and we’re thrilled that we had the opportunity to work together and bring so many new and exciting games into the world. As much as we have enjoyed creating these games, our current licensing term is coming to an end.
Beginning February 28th, 2017, Fantasy Flight Games will no longer offer for sale any games in conjunction with Games Workshop, including Talisman and all games taking place in the Warhammer Fantasy and Warhammer 40,000 universes.
We’re extremely grateful to our friends at Games Workshop for giving us the opportunity to play in the worlds that they created, and we wish them nothing but the best in their future endeavors.
For more details, please keep reading in the FAQ below. 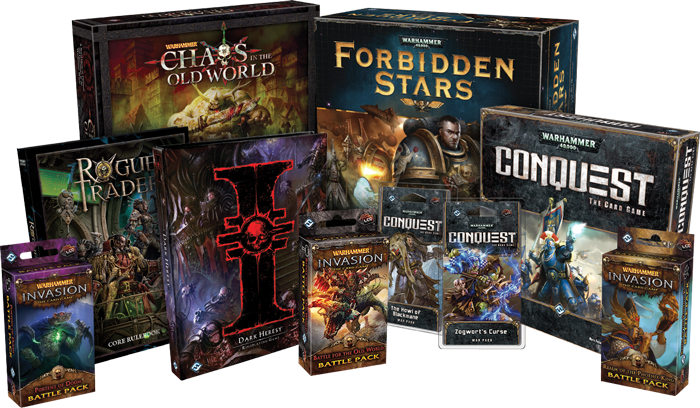 What is the timeframe for the conclusion of the business relationship?

What does this mean for Fantasy Flight Games products created from Games Workshop properties?

What does this mean for Warhammer 40,000: Conquest Organized Play?