Let me start this by saying "Holy Shit! I knew it was bad, I didn't know it was THIS bad!"

Gareth has broken more promises in regards to Far West than... fuck if I know. Really, I can't think of anything that comes close. And he's been doing it for over FOUR FUCKING YEARS!

Milestones are a thing, so in the time between the funding of Far West and, oh, I don't know - today maybe, I've - gotten married, worked in 3 different units and RETIRED from my job, watched my son go from high school student to gainfully employed to engaged, backed 188 further Kickstarter projects (don't tell my wife :) (Far West was #3 that I backed) and I can count the totally fucked up project creators that I supported on one hand. (I did not back any of Ken's)

With the exception of Tom and the Myth & Magic fiasco and mistruths, nothing comes close to the blatant lying that Gareth has put forth over four plus years. For simple volume alone, Gareth wins the crown handily.

Over the course of those four plus years, Gareth has made at least 46 promises as to the release date of Far West, some claiming completion was a mere few weeks out YEAR AGO. 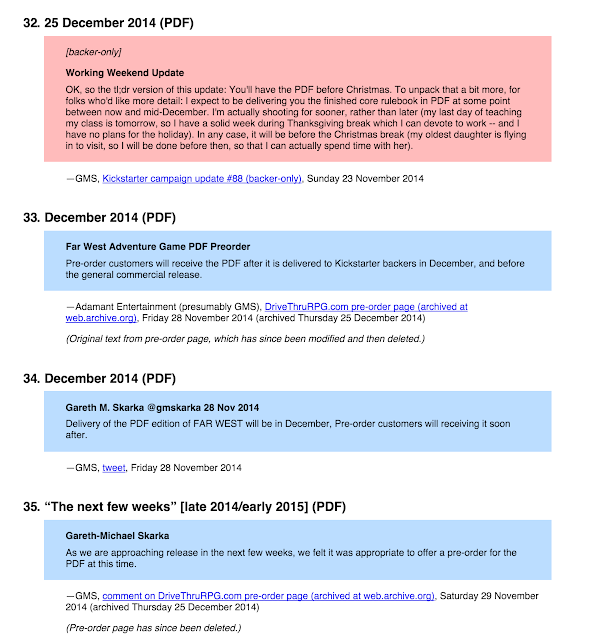 Where can you find the rest of this amazing list?

Do not pass go, do not collect on the empty promises of the Far West Kickstarter creator. Instead, go to http://www.mutedhorn.net/far-west-delivery-estimates/

You'll laugh. You'll cry (if, like me, you backed for $150 and have this as the professional piece of art work to remember Far West)

Best of all, you'll have some window into the mindset of Gareth.
Posted by Tenkar at 10:59 PM