Mid-week roundup is something I'm going to experiment with. I'm guessing it will move to Wednesday's in the future but who knows. Still trying to adjust to "free time" and the day of the week doesn't have as much importance as it used to ;) 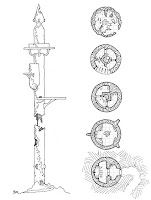 Events and interesting posts from our corner of the OSR. Could be links to previous posts here at The Tavern or from other blogs in my "I read their blogs" circle or other stuff that strikes my fancy. Just call me "Mr. Fancypants"

+Dyson Logos of Dyson's Dodecahedron just went to eleven. His Patreon has hit the support level need that he is now going back to some of his previous work and releasing it under a free commercial use license. First one up? Just look to the right... 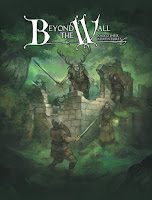 They're Coming Over the Wall!

+James Spahn , he of White Star, The Hero's Journey and many other best selling releases on RPGNow, gives a highly rated review on his Halfling's Luck blog to none other than Beyond the Wall and Other Adventures. To be honest, it's a game that ever really hit my radar, but after reading James' review I know I need to grab a copy. It seems like the system is perfect for creating a cohesive adventuring party right out of the box.


It's a Hero's Journey

Olde House Rules over at the Pits Perilous blog reviews The Hero's Journey by +James Spahn . Hero's Journey is a product I've been following since fairly early in it's development and I'm suspecting a mashup of Beyond the Wall and Hero's Journey could come close to matching my love for all things Swords & Wizardry.

+Tim Shorts of the Gothridge Manor blog has a series of posts dealing with Selling Your Loot. It's two posts into the series with more to come. There's some good GMing advice thus far, but that's nothing new for Tim.

+Timothy Brannan of The Other Side blog has written up Koliada, The Winter Witch for both BECMI and D&D 5e. She is a bad ass in both rule sets... heh. If you didn't already know, Tim really digs witches and has even released a Witch Sourcebook for OSR / Classic D&D games.

Last weekend Tenkar's Tavern opened up a new forum called The Common Room. The idea is to have a place where old school publishers, bloggers, conventions, podcasts, artists, writers and the rest of the OSR can find each other. Check it out. Sign in (using the social media app of your choice) and sign up. It's your community. It's your Common Room.

BTW, The Common Room needs more reviews linked. I'm sure many of you have already posted reviews on your own blogs, so why night make sure they get more eyes on them?