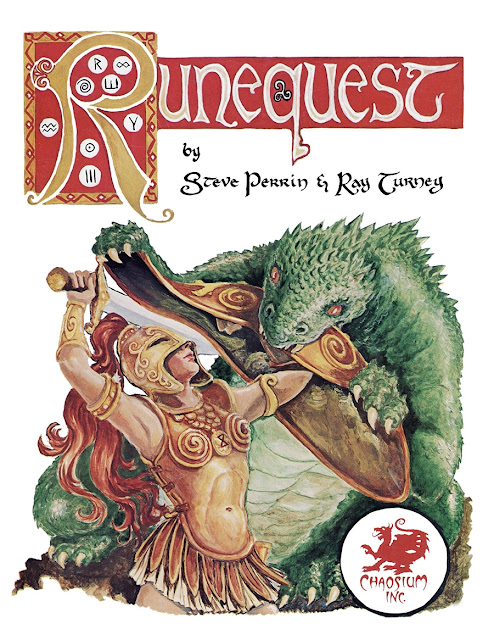 Classic RuneQuest is back and I'm loving it. I was a backer of the RuneQuest: Classic Edition Kickstarter and I've just gotten around to looking at the PDF. My God, if I had this in PDF when I came across Chaosium's RuneQuest back in 86 or 87 I might never have stayed with AD&D.

RuneQuest has flavor that D&D in it's various incarnations lacked at the time. It's default world, Glorantha, had depth. Ah shit, I'm sounding like a fanboy. The thing is, RuneQuest lacked something that D&D was built upon - levels. Hit points didn't progress, combat ability went up slowly. Armor prevented damage by hit location. If you wanted your party to stay in the same general area, they didn't suddenly out power all of their adversaries. It was, and is, a damn good system. You've seen it elsewhere, most likely in Call of Cthulhu.

RQ uses a percentile system and using skills is what increases them. Want to be an excellent pick pocket? You need to use the skill every session (and probably get thrown in the stocks in return, but that's another story)

As for races, you had some of your standard fantasy races but you also had Ducks (i'm sure someone on staff had Howard the Duck on their mind when writing this up)

For the time, RuneQuest had a rather complete presentation of the game rules. You could learn how to run RQ from just reading the core book. Certainly better organized and much more complete than Tunnels & Trolls, another game I enjoy from the early era of RPGs.

I ran Pavis and Big Rubble with my group for over a year using these rules and we had a blast. Of course, the group always went back to AD&D but that's another story ;)

The PDF is a beauty with hyperlinks in it's table of contents. This is going right on my tablet.

It's a well presented piece of gaming history that is just as relevant today as it was in the late 70's.
Posted by Tenkar at 10:26 AM