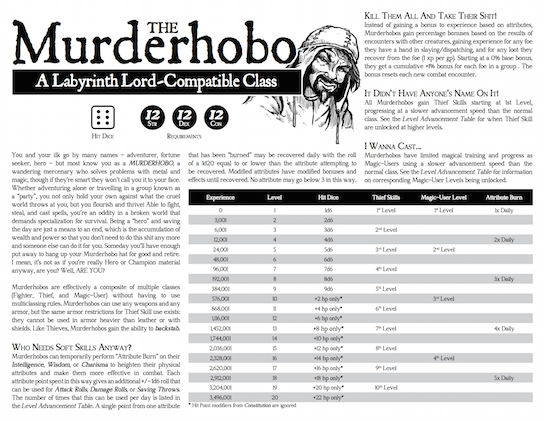 Ever want to play a class that reflects how many characters are actually played? Are you ready for the fall out of letting a Murderhobo in your group of murderhobos? Then this is the class for you at Pay What You Want pricing...


Now finally you can play an actual Murderhobo in your murderhobo games! This new class for Labyrinth Lord lets you hack and slash with the best of them while being able to be sneaky and sling spells! Ostensibly a multiclassed Fighter/Thief/Magic-User, this class literally gets away with and benefits from murder!

Kill your enemies with brute force, sneakiness, or even full-on magic to the face!

XP bonus increases with every kill!

Sacrifice your smarts and social skills to give yourself the edge in combat!

Use your meatshields effectively!

Talk your way out of all the death and destruction you leave in your wake!

Three variants: the Low Templar, the Deathblade, and the Strider!

WARNING TO GMS/JUDGES/REFEREES: This class isn't recommended for actual use in any game. Unless you let EVERY player use this class. And then there will be shenanigans. You've been warned.