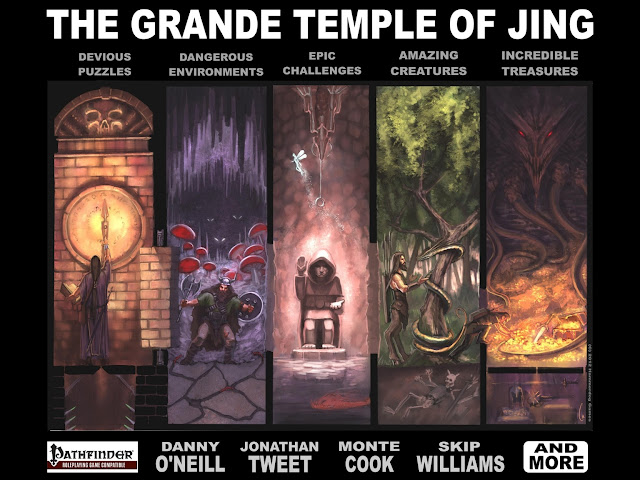 Way back in 2013 I wrote a post about The Grande Temple of Jing Kickstarter. It was to be the bestest, most amazing megadungeon ever produced - at least best of any based off of a 2001 release of a 40 page adventure for D20.

You too can turn 40 black and white pages into a 300+ page full color hard cover. It might just take 2 years longer than you expected.

In any case the new, improved The Grande Temple of Jing released at GenCon this year. Two years later than estimated (August 2013). I never backed this one so I completely forgot about it until I was poked by a reader.


The Grande Temple of Jing is the dungeoncrawl that rules them all. It is a megadungeon designed in the spirit of old school games, but with modern rules and sensibilities. It is presented here for the Pathfinder system, but it can be modified to play with your favorite fantasy RPG. It is designed for levels 1-20 but if this Kickstarter reaches its first stretch goal, then we will add content for epic level characters as well.

A part of the grande temple was originally published in 2000 as a thin, digest sized book, compatible with the d20 system. With your help we will update, upgrade, and MASSIVELY expand that book. In effect, we will make it the adventure it was always meant to be. Our goal is to create a full color hardcover tome that any roleplayer would be proud to have on their shelves. Professional production will ensure that retailers can display the book confidently on store shelves.

So yeah. The first rule of a successful Kickstarter is have 90% written before kicking. 40 pages of a 300+ page book puts it around 13% written when kicked. 12 celebrity creators and fan submissions didn't help.