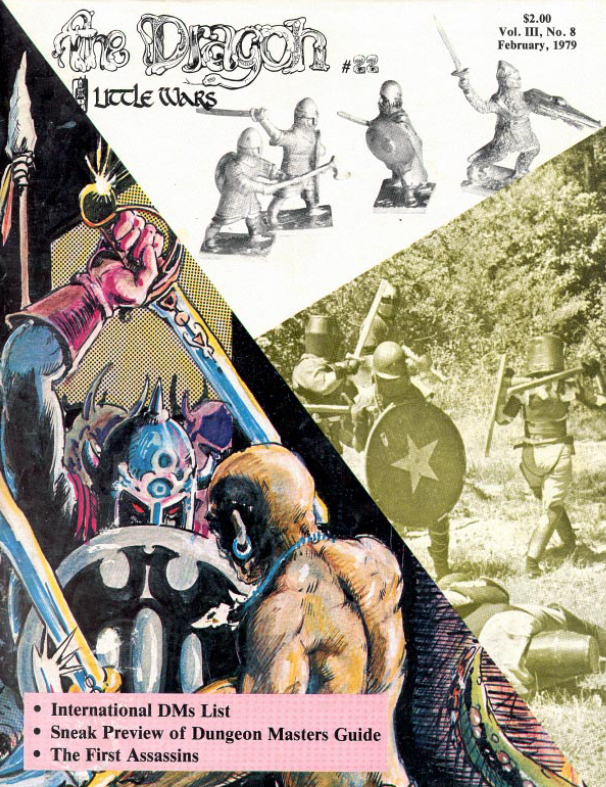 There is something special about issue #22 of The Dragon. Maybe it's the preview of the DMG that's included. It could be some of the opinionated reviews Gary gives of competing periodicals (if you think I trash "wayward Kickstarters" hard you aint seen nothing). Tonight's post is instead about Gary's vision from 35 years ago as concerns computers and D&D.


DUNGEONS & DRAGONS can be played on a computer. Computers are most certainly a big aspect of the near future, particularly the home computer. Non-programmable computer games are already making big inroads into the toy and hobby market. They will grow still more, and soon programmable games will join this trend. D&D program cassettes plugged into a home computer would obviate the need for a DM or other players. Thus the labor of setting up a campaign or the necessity of having a fairly large group to play in it would be removed. The graphic display would be exciting, and the computer would slave away doing all of the record work and mechanics necessary to the game, giving nearly instantaneous results to the player or players. Computerization of D&D has many other benefits also, and such games would not destroy the human-run campaign but supplement game participation. This is the direction we hope to make available to D&D. Let’s see if my foresight is as keen as my hindsight.

Now, I was a huge fan of the Gold Box D&D games on the Commodore 64. Well, except for Hillsfar or whatever it was. The games that was not a game, but I digress. They did not, howerver, replace gaming with a true gaming group.

To be honest, I don't think that 35 years later we are even near the point that a true RPG can be run without a human behind the DM Screen (literal, virtual or otherwise). Computer can deal with preprogramed options. Players seem to always find the choices in between. As much as I like Oblivion, Fallout, Dragon Age and the rest, they are RPGs in name only

Players also like rolling their own dice, for real or virtually, but the idea of computerized game aids has come far. They don't replace the DM, but make his job easier.

So, how was Gary's vision on the future? I think he did fairly well, even if he thought the benefits would arrive sooner than they did.

In any case, I do have 2 copies of this particular issue of The Dragon. It will be gifted in an upcoming OSR Christmas 2014 giveaway ;)
Posted by Tenkar at 7:46 PM