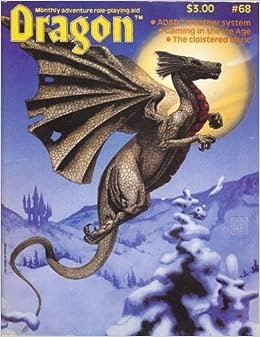 Looking at the weather in upstate New York, where parts of Buffalo are looking at 6 feet of snow, it makes me think of the campaign I had that died before the players ever reached their destination. Not because of random encounters but due to random weather.

The party was going to adventure in the village of Homlet and the Temple of Elemental Evil, but they had to get there first. We had decided it was winter in the campaign (as it was for us in real life at the time) and I broke out Dragon Magazine #68 (found a link to the PDF here) and used the enclosed weather system to add some realism.

This was fairly early in my gaming career (if you can call it that) and I was very much "play it as it rolled." We didn't fudge.

Well, the damn weather system dropped 5 1/2 feet of snow on the ill prepared party in less than 2 days, with temperatures remaining below freezing for at least the next few days. The party had no shelter. They were first level and were lucky to have bed rolls.

Come to think of it, that was my first and only TPK inflicted without rolling an attack roll (or ten) against the party.
Posted by Tenkar at 6:27 AM

Email ThisBlogThis!Share to TwitterShare to FacebookShare to Pinterest
Labels: weather