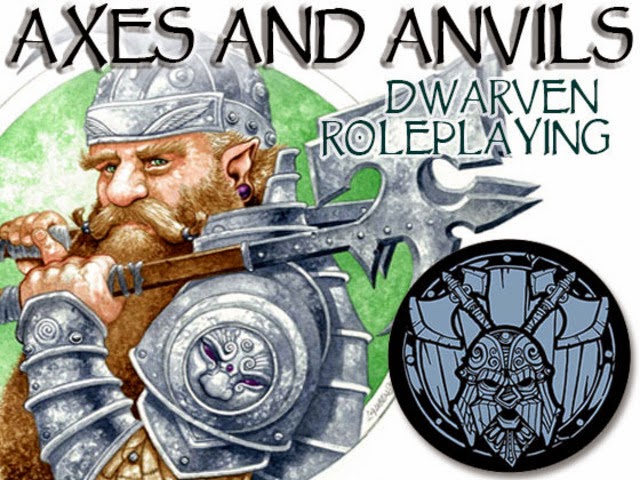 The Wandering Wizard has put Axes & Anvils in +Andrew Shields capable hands. It's not the first time Mike has done so, and I highly suspect the moment Andrew submits something that is highly improved on Mike's last attempt, Mike will inevitably pull a Nystul and pull the plug on Andrew.

Still, in the realm of things Nystulian, there is now a glimmer of hope.

Here's the latest update from the Axes & Anvils Kickstarter fiasco:

It has been a tough couple of years.

At this time, I am attempting to pull my life together and get to a level of stability with my health and my finances. I am also trying to make good on the Kickstarter projects that I owe my backers. Trying to do all this at once is hard on my focus and my morale. In the end, the only way I will ever be able to complete my Kickstarter obligations is if I get to a point where I have more discretionary time, income, and energy.

I need to concentrate on getting my own life together. However, I do not want to completely suspend progress with Axes and Anvils until I can give it more attention. I have brought Andrew Shields on to get the Axes and Anvils project to the next level of development. He will take the draft that was developed for playtesting and released in July 2013, and continue work on it with his own design style. The foundational concepts and design goals that inspired my vision of Axes and Anvils will be the base for Andrew’s work on the project, and I will still offer feedback and advice.

On the project home page, I laid out my plan for the game. These principles will guide Andrew as he continues the work on Axes and Anvils. These are the criteria we will use to judge the game’s success:

What can you expect?

Dwarfiness: Everything about the game is intended to put players into the right frame of mind to play dwarves. It is a celebration of all things Dwarf from what a Dwarf's beard says about him to what the deal is with Dwarven women.

Simplicity: Because this is a niche game many people will turn to for a "pick up and play" experience the system has to be simple and character creation has to be fast and fun. It is possible to create a Dwarven clan and a full party of 4 to 6 player characters in under an hour.

Cooperation: Whenever possible the game places more value on "we" than "me". Your party works together to solve whatever problems face their clan. The combat system is also structured around team play. Work together and victory shall be yours - fight alone and face an ignominious defeat.

The design is axiomatic, meaning a few simple rules drive everything instead of having a special case rule for every situation that could arise. Character development is based on the idea that you start simply and add depth as the campaign unfolds, which allows players to get started quickly and learn any complexities they may add as they go along.

A key concept is that the Dwarven Clan is treated as a character unto itself. As you develop as individuals the Clan for which you fight will gain respect and wealth. Your Clanhome will also expand to suit your needs. This gives an Axes and Anvils campaign a focus that many games lack right out of the gate.

This decision has not been easy for me. However, I believe that bringing Andrew back on the project is what is best for everyone at this time.

At this point it is too soon to project out reliable timelines. There will be an update at the end of November that will have a lot more information.

For now, please join me in welcoming Andrew Shields as designer on Axes and Anvils!