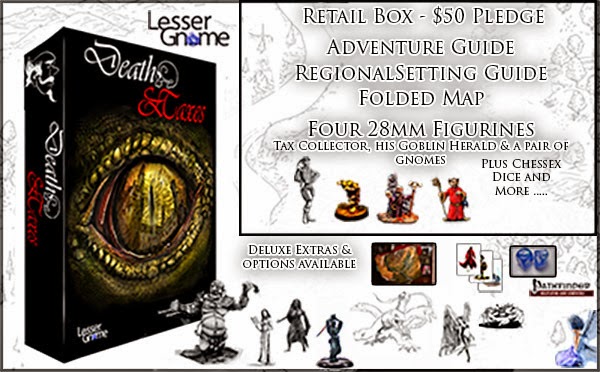 The Death & Taxes Kickstarter is down to it's last 30 hrs or so. If you haven't pledged yet and you were a backer of Whisper & Venom, obviously you somehow never got the message.

In case you don't already know, the Whisper & Venom Kickstarter (predecessor of the Death & Taxes Kickstarter) was one of the most successful Kickstarters I've backed. Not by money raised, but based on what the backers got for their money. A complete boxed adventure, minis, dice, a beautiful map - and the shit was on time. +Zach Glazar understands Kickstarter.


Death & Taxes is Lesser Gnome's follow-up box set to Whisper & Venom. It was nominated for an ENnie, for those of you who are into that sort of thing. Twice!*

Death & Taxes is an adventure for 4-7 players using characters level 4-6. Although designed for classic rules, the ultimate goal is to create total conversions of the game for popular modern systems. Once the goals for project funding and the backer surpass the initial stretch goal targets all options are on the table, As backers, you will have a seat at that table to decide which one will happen first! Look for the results to be revealed in our Stretch Goals section as the campaign progresses. The Gnomes are ready start to translating Death & Taxes into Pathfinder/OGL and (we hope) fifth edition compatible versions.

South of the Whisper Vale lies a land of gentle slopes with forests and greenswards. Small townships have sprouted alongside decayed municipalities. The area’s sparse populations are independent and self-reliant. Sporadic trade and a dim memory of avaricious rulers connect them.

So, here's what you get for your $70 bucks with Death & Taxes right now (although with so many easily reached stretch goals lined up, the list is sure to grow): 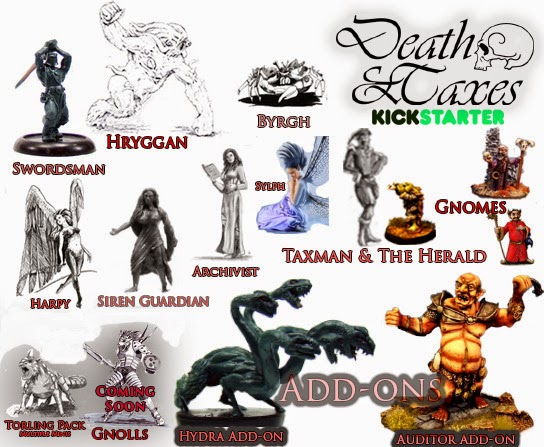 $16,750 For whom the bell gnolls (first custom gnoll figurine unlocked)

*This option will start conversion in May of 2015 (After Pathfinder). It is dependent on a friendly interpretation of the OGL from WotC. Other, more prominent, game companies have started producing titles for it. Why should they have all the fun?