Even while shutting down their Dragonwars of Trayth Kickstarter, the fine folks of Epic Quest Publishing took some parting blows, not just at me but members of this community. I feel it is only right to address their, as of now, final comment on the Dragonwars of Trayth Kickstarter. Below is the comment in question, provided to facilitate my response. 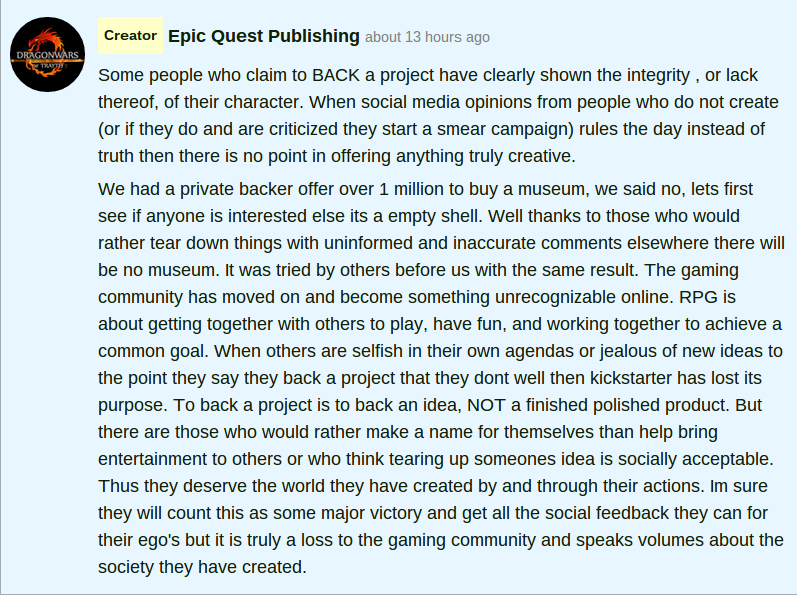 Now, I will address each piece as best I can:


Some people who claim to BACK a project have clearly shown the integrity , or lack thereof, of their character.

This is addressed to two of members of the community who decided to engage Epic Quest Publishing AFTER EQP removed their comments from The Tavern's blog posts.


When social media opinions from people who do not create (or if they do and are criticized they start a smear campaign) rules the day instead of truth then there is no point in offering anything truly creative.

Yes, these seems addressed to me and my little backwater blog.

Let's see, do I create? I mean, besides the blog, two podcasts, a handful of products on RPGNow, organizing the Tenkar's Landing Crowdsourced Sandbox Project - nope, I guess I don't meet their high standards.

I'd like to know what smear campaign I started AFTER being criticized. I thought the issue was my opinion of their Kickstarter that was the post that set this off. Or are they referring to my response to their threat of a lawsuit for my use of screenshots of their project that would have been covered under Fair Use. I thought the images I used to replace said pieces of art were appropriate at this point in the ongoing back and forth.


We had a private backer offer over 1 million to buy a museum, we said no, lets first see if anyone is interested else its a empty shell.

Alright. Forgive me for saying this so bluntly, but you are so full of shit I'm surprised you haven't choked to death. 19 backers after 3 weeks of the Kickstarter going live shows a very empty shell. If you turned down a million bucks for a gaming museum and let it walk away... fuck it, I can't find the right term for such stupidity. I'll leave it as bullshit.


Well thanks to those who would rather tear down things with uninformed and inaccurate comments elsewhere there will be no museum.

Stop with the whiny bullshit already. You either have a million dollar backer or you don't. You Kickstarter failure FOR A SECOND TIME has nothing to do with your fictitious museum. Your failure to fund a $8,000 Kickstarter lost you a million bucks? Anyone want to buy a bridge?


It was tried by others before us with the same result.

Huh? Are you funding an RPG product or a museum?


The gaming community has moved on and become something unrecognizable online.

I think this deserves a post of it's own. It has moved on, and grown and embraced the internet.


RPG is about getting together with others to play, have fun, and working together to achieve a common goal.


When others are selfish in their own agendas or jealous of new ideas to the point they say they back a project that they dont well then kickstarter has lost its purpose.

Aimed at the two I mentioned above. Can I ask what new ideas are being referred to, as I know non-OGL monsters were used in the offered sample, so they certainly weren't new.


To back a project is to back an idea, NOT a finished polished product.

No, to back a project is in the hope of getting a finished, polished product. And yes, your maps sucked. Really sucked. Are you now saying what you showed was not what the finished product was to look like?


But there are those who would rather make a name for themselves than help bring entertainment to others or who think tearing up someones idea is socially acceptable.

Its called criticism. Come out from your basements and face the world.


Thus they deserve the world they have created by and through their actions.

Again, step out into the sunlight. You may find it a rewarding experience.


Im sure they will count this as some major victory and get all the social feedback they can for their ego's but it is truly a loss to the gaming community and speaks volumes about the society they have created.

The failure of this project, that was destined to fail without the help of any outside sources (Kicktraq estimated it would end with about 5K if I recall correctly, well short of the 8k needed for success), speaks volumes of the quality of said project.

Some advice. If your project fails twice, maybe you need to find a different project, as this one just isn't going to work. 19 backers after 3 weeks showed a particular lack of interest, no matter the monies raised. You had more modules planned (25) than actual backers. That is something you really need to look at once the shock and anger wears off. Because when you think about it, the community delivered the message you didn't want to hear.

Don't be angry at the messengers. Think about the message instead.