Review - Unframed: The Art of Improvisation for Game Masters 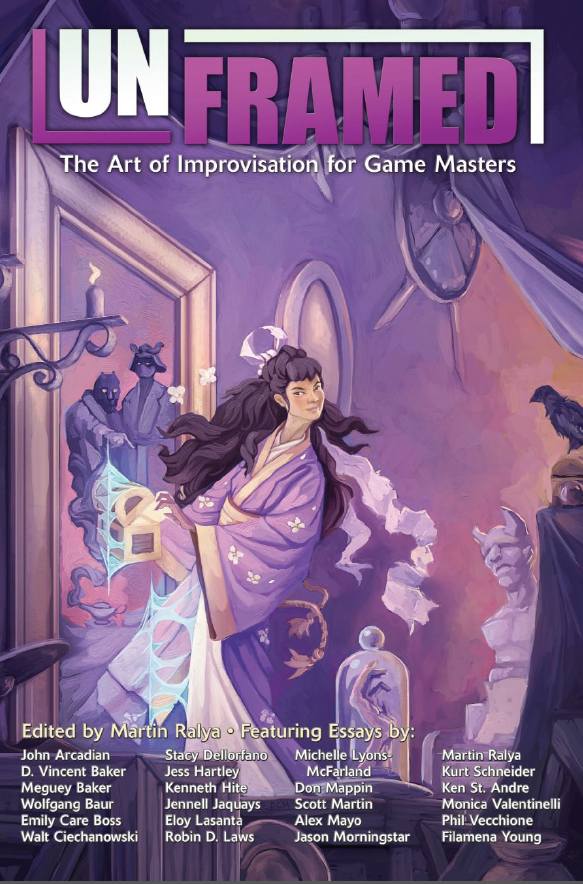 UNFRAMED: The Art of Improvisation for Game Masters is probably misnamed, as it could easily include players in that title, as it's a skill used by all at the gaming table.

I had a response to my Sneak Peak post of UNFRAMED last week that included a remark that basically asked "who needs a book to tell them how to improvise?" To that I would answer, very few need a book to tell them how to improvise. However, a large portion of the gaming community could use some help in learning how to improvise more effectively. If you GM, this skill is more important than knowledge of the game rules, IMHO. It's also a skill that is often overlooked, because we all do it to some extent. If you want to get better at it, this is the book for you.

Now, are you going to find value from each of the two dozen essays? I'm going to guess that would be impossible. Everyone's mind works a little (or a lot) differently than others, which is why I put a huge value on the number of different authors contained within. Someone, or many someones, have something here that will give you the knowledge to up your improvisational abilities.

For me, Robin Laws essay is too formulaic - but for others, it will be spot on. John Arcanian's article on Island Design Theory is spot on for me, if not as a tool for improvisation but rather as a sandbox design theory I can wrap my head around. Of course, a sandbox styled campaign is nothing if not highly improvisational.

Jennell Jaquays' article also struck home with me, as am nothing if not a procrastinator when t comes to game prep. There are some helpful tips for me to save some time, and using a "Dead Pool" is so damn obvious I should have thought it up years ago.

Jason Morningstar summarizes his advice on improvisation at the gaming table as: Listen more than you talk. If you are going to improvise, let your players do the brunt of the work (at least, that's my take on it... heh).

I've always thought of myself as a decently skilled improviser as a DM, and yet I've added at least a dozen tricks to my repertoire and I've opened my eyes up to some techniques that will make the gaming sessions I run better. Not every article spoke to me, and there were a few that left me scratching my head, but that's because we are all wired differently. What works for me may not work for you, and visa versa.  Still, what I found within UNFRAMED that works for me is well worth the price of admission.