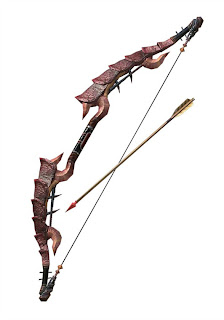 Falagier's Bow - Falagier's Bow is a military composite long bow. It imparts neither a bonus to hit not a bonus to damage, however, if the wielder has a Strength Bonus to Damage, he may add that to the bow's damage upon a successful hit.

The true magic of Falagier's Bow, also known as "Friend or Foe", becomes obvious when it is used to fire into melee combat - it will never strike a "friend" or someone on the wielder's side in combat. It will  strike a foe or no one.

Falagier  himself was a mercenary sniper, and a highly effective one at that. He used his bow to wreck havoc upon many an adversaries' troops, until finally succumbing to an assassin's blade (he still helped strike down nearly a dozen enemy troops in his last encounter prior to being permanently removed from  his occupation). Upon death, his bow was saved as a trophy by his assassin before being lost generations later.
Posted by Tenkar at 2:48 PM