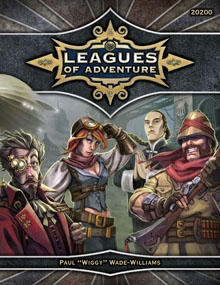 I really do like the Ubiquity RPG system. I think it accomplishes much of what Savage Worlds can accomplish without a lot of the system weight that get's attached. Lets call Ubiquity my favorite system that I've yet to play.

Leagues of Adventure is the latest game to use the Ubiquity RPG Engine. Notice I said "game", not sourcebook. Unlike Savage Worlds, which has a core rules set and source books that feed off that, games that use the Ubiquity system are just that - stand alone games.


That can be both good and bad. It's great if you want to pick up a single set of rules and run with it all in one package. Not so great if you are getting the same core rules restated for each genre that you pick up. It is, admittedly, a small quibble, as the Ubiquity core rules are much lighter than those that constitute Savage Worlds.

Leagues of Adventures covers the late Victorian Age. It is not an era I have much experience with, either in fiction or gaming - Sherlock Holmes is about as close as I usually come. Thankfully, LoA comes with extensive write ups of time lines, important historical personalities and world leaders that enable even a Victorian Novice like myself enough pieces to drop in front of the players to make it sound legit. Very well done and extremely well researched. I enjoyed this section as both a gamer and a former history major ;)

Of course, as fun as the historical Victorian is, Leagues of Adventure takes things just a little bit further:

In Leagues of Adventure the boundaries of science are being pushed far beyond their historical limits. While hardly commonplace, mole machines, airships, and even time-traveling machines do exist. Some are already in the hands of governments and Leagues, while others remain the personal property of their slightly mad inventors.

Therein lies the hook of LoA - it's Jules Verne and than some. Our history and just a tad more. Victorian with pulp. I like it.

Would I run this before Hollow Earth Expedition? I don't know? I'm definitely more grounded personally in the Pulp Era of the 30's, but League of Adventures certainly gives the tools to allow one to bridge the gap.

Did I mention the extensive bookmarking of the PDF?  Very well done.

Welcome to Leagues of Adventure a rip-roaring setting of exploration and derring-do in the late Victorian Age!


Leagues of Adventure is a roleplaying game set in the late Victorian Age, a gritty steampunk game where the hostile natives are a serious threat, a pulp action game where the characters eat savage warriors for breakfast, a highly cinematic one which allows the characters to swing single-handedly from the underside of an early airship while bare-knuckle boxing pterodactyls over a lost plateau.
Truth be told, it’s whatever you want it to be!


Whatever drives your character, there’s a world packed with danger, excitement, and mystery out there waiting to be explored!


So take an action packed trip into the world of Leagues of Adventure!