Games From the Basement - Cyberpunk 2020 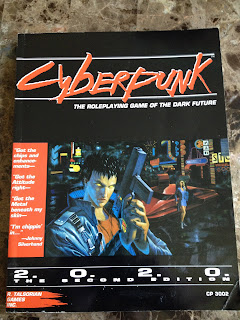 I always like the idea of playing in a cyberpunk themed game.  Somewhere I have GURPS Cybertech(>) filed away, shadow run always seemed very cyberpunk to me, and obviously a game with the title Cyberpunk 2020 is going to be cyberpunkish.

Did I ever play it?  Nope

I always had a much more varied taste in RPGs than the rest of my gaming group did.  There are lots of games that I bought because I thought they would be cool to play.  This was one of them.

Teenagers From Outer Space I could understand them not wanting to play... Cyberpunk I thought would have hooked them in.  Ah well.

At least we had Rifts ;)

For those that want to play the AD&D 2e Trivia Game (rules are listed here), this post's questions are as follows:


Question 1 - For 3 points - Must a PC always undergo training before advancing to the next level? (please give a brief explanation of your answer)


Question 2 - For 4 points - Which type of halfling dwells in the mountains?


Question 3 - for 6 points - What are the four nonmagical ways of  detecting an invisible creature or character?

Email ThisBlogThis!Share to TwitterShare to FacebookShare to Pinterest
Labels: cyberpunk 2020, games from the basement