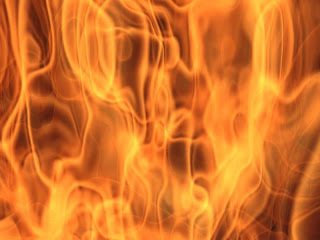 Remember a few months back when I remarked that just about every D&D session has either fire or torture i it, almost invariably introduced by the PCs themselves?  Last night my party managed to introduce both, and in the same scene yet!

Investigating the reports that goblins were accessing the basement under the church in town, the PCs discovered a hole in the wall adjacent to the twins sewer.  They waited in am bust for the return of said goblins, and when they made their entrance the party's mage threw a flask of oil, striking the wall just above the hole the gob's were entering from.  As the gob's lost their footing, he followed it with a well placed lob of a lit torch.  Four gobs were crispy excrement covered corpses, and the fifth (the first through the whole) was alive and captured by the PCs.  Amazingly enough, they did not set the church on fire, but I'm not sure if that was from lack of trying.

After asking (1), one, uno, ein question and not liking the answer, the night blade cut off one of the gob's pinkies.  Literally within minutes, we able to mark both "fire" and "torture" of the list of things for the PCs to do ;)

Ah, the things that PCs do.  Afterwards, they were summoned to meet the mayor, who asked them to travel to the Goblin Halls and do away with the goblins that were reestablishing themselves there as well as poisoning the town's water supply.  After a sizable upfront payment, they agreed, and set forth for the Goblin Halls.

They encountered goblin slavers on the way to the Halls.  The night blade made an amazing surprise attack on the slavers' cart, impaling an arrow into the cart's wooden wheel and causing it to abruptly stop. The fact that he was aiming at a goblin guard and not the wheel is inconsequential to this story, as between the lizard man gladiator with a death wish and the mage with a sleep spell, there were no living goblins left to be concerned about the cart.  The capture red miner within the cage of the cart was released and sent back to town.  We was, needless to say, extremely grateful.

Shorty thereafter the party arrived at the Goblin Halls.  After discussing possibly alternative access points other than the one that had been obviously recently reopened, the party decided to enter within.  In the first room they discovered a bullying incident, with nearly a half dozen goblins beating upon a much smaller than usual goblin.  Before the bully's knew what was happening, bits and pieces of goblin were everywhere.  The mage made an offer to the goblin runt, which equated to "serve me or die".  The offer was quickly accepted.  The runt is as smart as he is small, and he was alb to sketch out a quick map of the Halls for the party, giving them an advantage they lacked prior.

Next they entered the "practice room", where goblin recruits practiced on living (or recently deceased) "dummies", otherwise known as captives.  On captive was still living, and after giving him a healing potion, the warden (who had attempted to investigate these halls a few days earlier) was now an extra sword arm for the party.  Things were certainly looking up.

The temple area was uneventful, except for the the robed figure that instructed the party to sit (in goblin) when they entered.  In the end, the robed figured was an animated skeleton that made no attempt to defend itself against the party's attack, and it was quickly destroyed.  It's destruction did leave them with a message "tell my daughter i love her".  See, now the players get to be messenger men too ;)

Well, maybe not totally uneventful, as they did discover a secret treasure room.  Most of the items inside had rotted over the years, but the gold and river were still in fine shape and ripe for the taking.  Which brought to life to smallish wooden dogs, which were dispatch fairly quickly, but not before giving the gladiator a nice splinter (and the first wound suffered by the party)

Next up were two barracks rooms.  The first held a half dozen sleeping goblins that stood no chance when the gladiator tore through them.  He also tore through most of their belongings.  I guess we will never know if that was a potion or poison.

The party then moved on to a sort of burial room.  While moving coffins in search of goodies, a goblin patrol came across the party.  As the leader put a horn to his lips, the gladiator proceeded to push the horn down said leader's throat.  The survivors tried to flee, but were struck down by the PCs, or in the case of one, pinned through his neck to the floor by a javelin thrown by the party's warrior.

Yep, things are certainly getting a bit more exciting for the party compared to the first session.  We started at 930 pm and ended shortly after 130 am - and i had totally lost track of time.