The Official Adventurer Conqueror King OR DIE! Obsidian Portal Page is Up 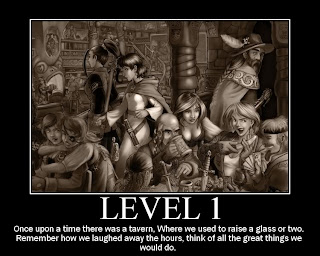 Yep, our little Obsidian Portal page is up and running.  Adventurer Conqueror King or Die! is just 2 sessions old, but I'm blessed with highly skilled, entertaining and funny as all hell role-players in my group.  To say I'm blessed is an understatement, as their game play brings out the best in me as a GM.  If this is how the game is going after 2 sessions, I can only imagine the delightful insanity we will be experiencing after 20 ;)

So come, look at the psychotic lizard man gladiator, he who would box his own shadow if it would give him a fight.  See the mage that seems so unlike a mage, yet has knowledge like a sage (and a goblin servant too).  Observe the shadow blade as he single handedly disables a slavers cart (as disabling a slaver would be too easy a maneuver).  Watch as the warrior manages to impale a goblin through the neck in an upright position.  Wait with the rest of us as two others join the ranks (as those following along from home can probably tell, the party lacks any kind of healing... hint).

Yes, join us.  Well, read the exploits.  You can't really join us, as I think my capacity for effective GMing is around 6 players in total.  No worries though, as the wife has given me the blessing to run a second game in a month or so.  Probably not ACKS, but at least you'll have an idea if my table is one you might want to sit at.  In a virtual manner.  As this is via G+ at the moment.  My kitchen table is damn small and only fits 4, but the wife and I like it that way ;)
Posted by Tenkar at 9:22 PM