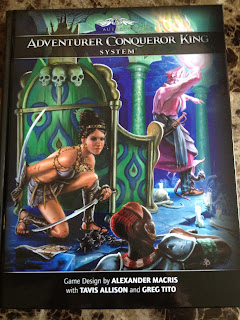 There's a handful of things that stick out to me, especially as I go through the spell and magic item sections.

There really is a dearth healing spells in ACKS.  No Cure Critical Wounds, no Heal - it does make a deadly game system even more deadly, especially at the higher levels.  The best you get is the 4th level Cure Serious Wounds spell, which heals 2d6 +1 point per caster level.  Admittedly, that isn't all that bad.  Still, I see no reason why Cure Light Wounds couldn't heal 1d6 +1 half the caster's level.  This wouldn't even change the result of the roll until 4th level (as the base CLW spell heals 1d6+1).  Consider this a possible pending house rule.

The Sleep spell as per the AD&D 1e Player's Handbook gives is an area of effect of 3" diameter (15' radius).  "All creatures to be affect by the sleep spell must be within the 3" diameter circle).  I always assumed (possibly wrong but who knows) that the caster didn't have direct control over who the spell affected.  If PCs were present in the AOE, we determined randomly if they were dropped by the spell.  ACKS clears things up quite a big, by allowing the caster to affect one target or target a group of creature.  A group by this definition would usually exclude the other PCs.  This was something I had to read twice in game to make sure I was reading it right, and to doubly make sure I didn't default to my AD&D baseline.

Continual Light is not forever in ACKS, it's more like indefinite.  The caster can maintain one continual light spell per level of experience indefinitely without need for concentration.  No "every corner is lit by a conical light spell" in the cities in ACKS.  Guess I won't be playing an Eberron Campaign with these rules (not that I planned to).

The monster section is.  Yep, it simply is.  It's boring.  Alright, maybe not boring, but certainly uninspiring.  Then again, I have so many OSR games, and most of them have pretty uninspiring monster sections too.  However, I do have my Tome of Horrors Complete for Swords & Wizardry.  Much nicer selection to draw upon, complete with possible hooks and encounters.

A similar dropping of the ball occurs during the mention of racial languages.  They include halflings in the mix, but there are no halfling PCs in the game.  They are there as NPCs, as a sort of human / dwarves mongrel racial hybrid, but you can't play them.  I actually thought they weren't even going to be in the monster section, so this bit caught me by surprise.

Swords and Armor don't go above a +3 bonus, which is quite in balance with a game that tops off at 14th level.  I very much like the Scavenging Treasures tables, as it puts some nice flavor to the non-magical stuff the players like to loot to make a few coins off of later.

Alright, all for now.  I need to add some more updates to the campaign's Obsidian Portal site.