Mini Review - Classes of the Far East (for Labyrinth Lord) 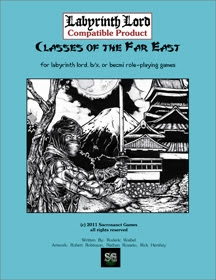 This isn't the first time the Far East has been slipped into the D&D / AD&D systems.  Oriental Adventures for AD&D did an admirable job of it.  Now we have a nice conversion for Labyrinth Lord which appears to take it's own path.

Classes of the Far East from Sacrosanct Games four classes and one racial class, so that really makes five classes.

The Ninja is a thief with some classic move ninja powers thrown in (and no trap finding / removing ability), Mahoutsukai are a cleric / magic-user multi-class sorta class, Yokai are anthropomorphic cat people (with cleric spells) and Samurai.

Not a bad collection of classes if you want to add some eastern flavor to your campaign, although I do have to wonder why 3 outa 5 get access to cleric spells.  Not saying I have a problem with that, just curious.

So dive right in, and create characters born to be legends!