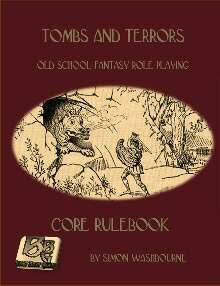 Yes, I know I had a post about there being too many damn retroclones last week (or simulacrum games - I hope that is the right word) and yet here I am with yet another.

Tombs and Terrors, otherwise known as TT (not T&T - that's for Tunnels & Trolls) refers to itself as Old School Fantasy Roleplaying.  I'm going to hazard a guess and declare it to be AD&D simulacrum, very compatible with any of the games that currently restate any of the earlier D&D editions.

It also seems to borrow an idea from Castles & Crusades, but as opposed to just having primes, we are presented with primary, secondary and tertiary stats.  I like the way they are presented here, and if I ran a game of C&C, I'd borrow this from TT to retrofit the SIEGE Engine.

As I've stated before, I don't think we NEED any more retroclonisimulacrumie games, but that doesn't mean I wouldn't play them.  I don't need ice cream to live, but i certainly like it ;)

Besides, they present a spell casting bard.  I like bards.  To the point that I am as annoying as hell when I play them.  So be it.
Posted by Tenkar at 5:20 PM