Basic Roleplaying Quickstart Edition - Worth It?

Earlier today I gave my thoughts on Classic Fantasy for Basic Roleplaying.  Some folks may be interested in checking out the system, but don't want to cough up huge wads of cash for something that might not be their cup of tea.

I understand.  Really, I do.  It's why I've been putting together the free quick starts postings.  Sometimes a new RPG game system can be like sushi - all your friends like it, but to you its just raw fish.

For those that are interested in Basic Roleplaying, but are concerned it might just be raw fish, Chaosium has published the Basic Roleplaying Quickstart Edition.  It's not free.  It's a whole 2 bucks.  Less then a Starbucks Coffee - except I also group coffee with raw fish, but I digress. 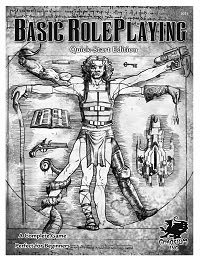 Two bucks gives you a pruned down version of the BRP rules (no Magic, sorry), but it is more then enough to run a session or two, or even a campaign if you are the improvising type.  Well, probably lots of improvising, as  the equipment list is fairly short.

It includes 7 extremely short scenarios, but they serve the purpose of showing the flexibility of the rules as written.

Me, I'd want a copy of the BRP Quickstart in all my players hands before running a BRP game.  Let them print out their own copies or just work off the PDF.  I'd rather start them small and add to their knowledge, then drown them behind all the options presented in the full rulebook.