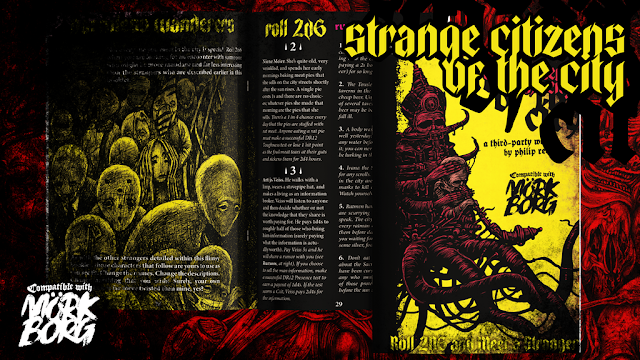 Phil Reed is one of my favorite Kickstarter creators. His work is always top-notch and one time (or early) and you can usually buy-in for the PDF version of his latest project for real cheap - in this case Strange Citizens of the City, a Third-Party Mörk Borg Book (by Phil Reed) can be snagged - with stretch goals - for a single buck!

I own the Mörk Borg RPG in print, and while I'm not sure I'd run it, it oozes with inspiration that I could (and will) use in my net OSR campaign.

NOTE: The $1 PDF reward includes Strange Citizens of the City in PDF and, if the stretch goals are unlocked, the two other 32-page zines.

When the third-party Mörk Borg license was released (find the license here), I knew I would have to craft something for use under the game's delightfully light and streamlined engine. Personally, I prefer roleplaying game systems that do not block the gamemaster's creativity . . . and getting out of the way of creativity is exactly what Mörk Borg does.

The game's openness to imaginative play suits me perfectly. Add to that the game's visual design and there was no way my mind was going to let me ignore the existence of that third-party license.

Strange Citizens of the City is a collection of characters, possibly monsters, and was written to assist the gamemaster in populating the game world. The characters described within the pages of this slim booklet are divided into three categories:

Strange Citizens of the City, a 2d6 table to characters and the bulk of the book. Each of these eleven different characters fills a two-page spread and offers background info on the character that the GM may run with or ignore. (twenty-two pages)

Hired Goons, a 1d8 table of minor characters who are far less detailed than those characters described in the previous section of the book. At times, the 2d6 characters within the Strange Citizens of the City chapter will list "hired goons" as a special ability of sorts. When that happens, feel free to select a few of those goons from this section. (four pages)

(Possibly) Harmless Wanderers, 2d6 characters that are mostly intended as bizarre encounters the player characters may stumble into when walking the city streets. These characters include no game statistics and are purely descriptive. (four pages)

And that is it! When we add the front and back covers, we reach the book's total of thirty-two pages and have no more space left to discuss. Strange Citizens of the City could technically be used with almost any fantasy roleplaying game -- so long as the gamemaster isn't afraid of adapting concepts and inventing the stats necessary to use the characters with other games -- but it works best with Mörk Borg.

Tavern is supported by readers like you. The easiest way to support The Tavern is to shop via our affiliate links. DTRPG, Amazon, and Humble Bundle are the affiliate programs that support The Tavern.
You can catch the daily Tavern Chat podcast on Anchor, YouTube, or wherever you listen to your podcast collection.

Don't forget to subscribe to The Tavern's weekly Newsletter!