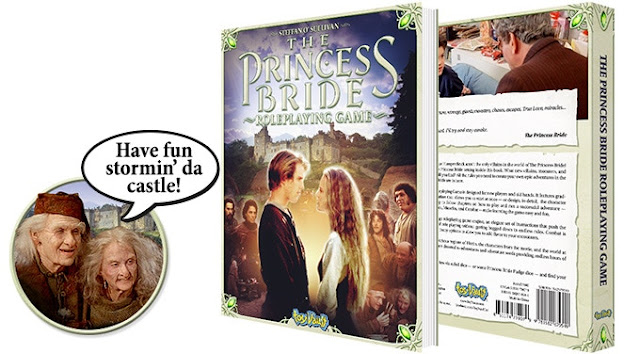 I really don't know what to make of The Princess Bride RPG. While it was a fun movie (with a cult like following) it was never as big a deal to me (as a movie) that it was, and is, to some in my social circles.

The fact that it is powered by FUDGE (I stumbled across the rules in 96 or 97, they were first released in 93) isn't a selling point to me. Sure, the rules creator is also the one behind the Kickstarter, but that still doesn't do much for me.

Thankfully, there is a 48 page, professionally laid out quickstart of The Princess Bride rules for those that want to try before they buy, which might be wise as the low end buy-in for this 250 plus page KS ain't cheap:

$25 for the PDF is cost prohibitive in my opinion, especially when the Print plus PDF plus physical map is $50.

FAUX Leather book plus digital plus FUDGE dice plus map is $85 and a wooden box that adds Grampa Tokens is $200.

For those that are part of "the following" its the game they've all been waiting for. For me? Eh...