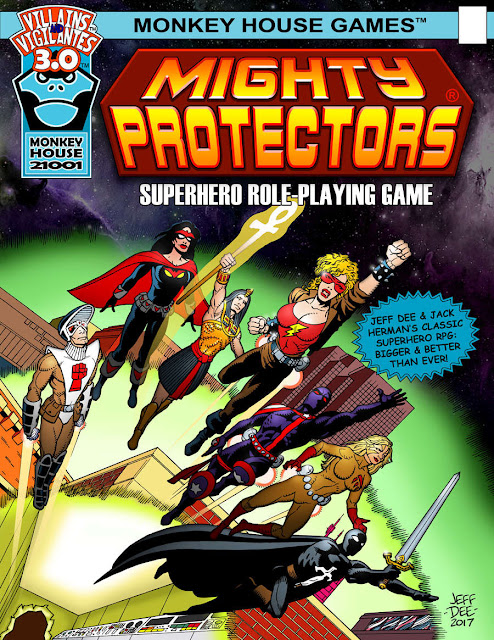 I never owned Villains & Vigilantes growing up as a gamer but I sure played it. We tried about every supers game in the late 70s and early 80s and while none stuck around and were played for any length of time, V & V stuck around in our minds. How could it not? The ads in Dragon Magazine just looked so damn cool.

Well, the latest edition of Villains & Vigilantes just released in PDF and its called Mighty Protectors.


You can combat the forces of evil! Find their hidden enclaves with your super-senses, and bust your way in with powerful fists! Use your incredible agility or invulnerability to ward off their attacks as you blast away with energy bolts, or confront them with your martial arts or weapon skills! Drag them squirming and cursing to prison, to be brought to justice! Become a champion of truth and an idol of millions!

Mighty Protectors is a registered trademark of Monkey House games. Villains and Vigilantes is a trademark of Scott Bizar, used with permission.

All sales generated via The Tavern's Affiliate Links earns a small income for The Tavern and lets us do what we do best. What do we do best? Drink beer and...
Posted by Tenkar at 9:05 PM