Monstrosities, the S&W Monster Book - Back in Stock in Print - Just 20 Copies 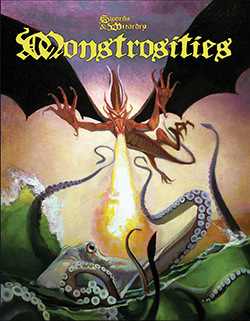 Run, don't walk to the Frog God Games Online Store if you want your chance to own a physical copy of the Monstrosities book for Swords & Wizardry. 50 bucks gets you a copy in Print and PDF, but only while stock remains.

Personally, I prefer it over Tome of Horrors Complete as it has both familiar and new creatures as well as adventure hooks. Oh, and the price isn't bad either ;)


You can never have too many monsters, and this book is filled with them! No matter what kind of campaign, there are foes galore to stock its wildernesses and dungeons, even the unknown depths of its mysterious oceans. This is a compendium that contains the monsters from the rulebook and many monsters from the First Edition of the original roleplaying game, but there are hundreds and hundreds of completely new beasts. Note: this is a second printing of the original Swords & Wizardry monster book, updated with errata and hundreds of illustrations.