As We Await Approval from RPGNow, Pocket Creatures Volume 1 is being Released for Free in The Tavern's Facebook Community 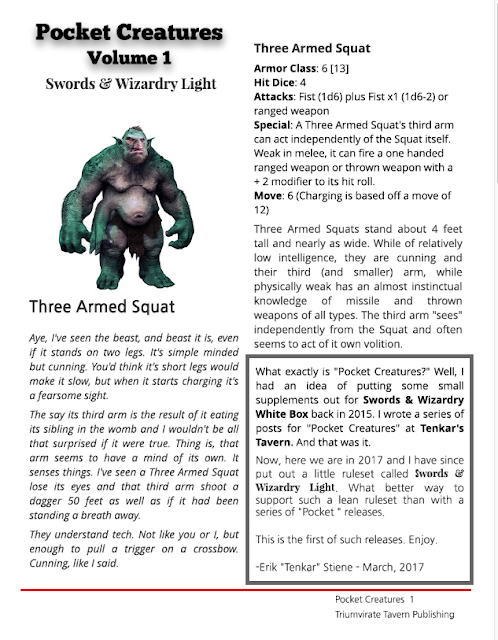 I don't know how much longer it is going to take to get approval at RPGNow for Pocket Creatures Volume 1. Until its approved, it won't show up for sale. With the weekend knocking on our door quickly followed by Gary Con I'd like to get this in the hands of gamers sooner than later.

So, I'm releasing it to The Tavern's Facebook Group in a few minutes.

On RPGNow it is going to be PWYW, so it isn't going to be a money maker, but if you like it you can always re-download it later at RPGNow. Heck, you could even throw in a few coppers too ;)

Pocket Creatures Volume 2 is laid out and ready to be submitted.

I'm not sure we'll have a print ready copy of the Swords & Wizardry Continual Light rules in time for Gary Con. If that's the case I'll bring a few dozen print copies of the two Pocket Creatures Volumes to hand out.
Posted by Tenkar at 10:27 AM