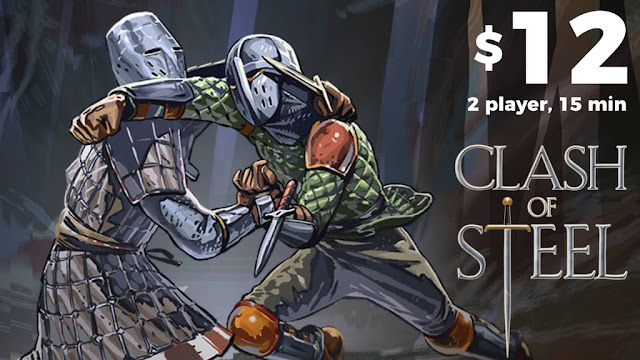 Before I even talk about the Kickstarter itself, lets look at the graphic above. Nice art, states the buy in, players, game time and of course the name of the game. If you want your project to be effectively shared in social media, the above is a perfect example of what to do. Well done.

Now, on the the Clash of Steel Kickstarter.

12 buck buy in and 15 minute gameplay? I'm nearly sold on it already.


Gameplay focuses on managing your limited stamina, predicting your opponent's actions, and whittling their defenses down until you can land a final, crushing blow.

The game takes about five minutes to learn and 10-15 minutes to play. There are no random elements -- the only unknown is which cards your opponent's playing and how much they're willing to spend to gain the upper hand.

At its heart, Clash of Steel's gameplay is a series of tactical decisions. Do you want to hurt your opponent, stop them from hurting you, or edge for an advantage?

You won't be drawing random cards from a constructed deck; there aren't any lucky streaks; it's just several careful decisions, round after round, until one duelist is mangled to the point of defeat.

Every round works the same way, making the game quick to learn and easy to play, but allowing for enormous tactical variety.

One round you might fight aggressively, selecting cards to inflict maximum damage. But in the next round, you might take your time, reposition to a range more suited to your weapon, or try to mitigate your foe's advantage.