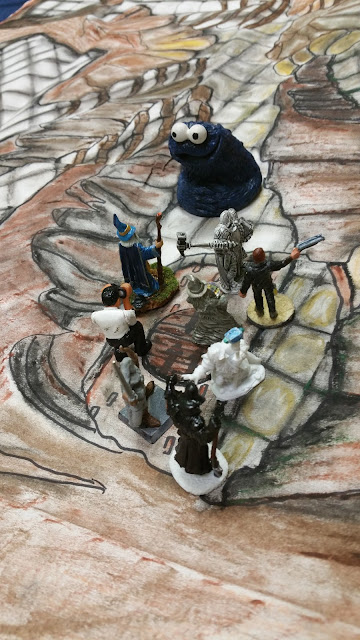 The truth of the matter is that the cover to the 3rd printing of Swords & Wizardry Complete and the all female art team isn't going to make a noticeable dent in the numbers or percentage of female gamers in the OSR. Why?

Because it isn't a retail release.

Not many are going to be looking at a shelf of gaming books in some bookstore or game store and stumble across Swords & Wizardry Complete. Not the Otis cover. Not the tree on acid cover. Not any cover at all. Simply because it won't be on a shelf to be seen.

Those that find it either will have found the Kickstarter itself or, afterwards, the Frog God Games webstore. They are already IN the gaming hobby. Most likely they are already in the OSR and are already playing Swords & Wizardry.

So, how do you bring more gamers, regardless of gender or age, into the OSR?

It isn't by playing in your weekly group composed of real life friends. That group has it's own dynamics and is probably a bit insular. It's never easy to add to a group like that and the vetting process for prospective new players is often on par with joining a secret society.

It isn't with new art or old art. Not unless you can get it in a retail environment, either in a boxed set (visibility) or distributed for free (viral marketing.)

The answer is quite simple.

Last night I played in Tim Connolly's Benchledale Campaign at Legendary Realms out in Plainview, NY. We are using the AD&D 1e rules. My first session had 11 players. I think last night had nine. It's a mixture of grognards who have played the game in one form or another since the late 70's and Pathfinder players that are trying something new. That just happens to be old. And they like it.

See, the play is the key. Roleplaying games don't sell themselves while in a virtual store or on the shelf in some retail environment. You have to know about RPGs to be interested enough into finding out more about them. The way to gather that interest is public play.

I'll even put my money where my mouth is, so to speak. Or at least, my DMing time. Come Spring of 2017 I'll offer my services to run Swords & Wizardry twice a month at Legendary Realms, if they will have me. Games run, in public for other gamers to see, question and hopefully gather interest. You could be a 18 year old from the Planet Alpha Centuri or a 60 year old Grognard, we'll find room for you at the table.

I noticed they have +Joseph Bloch 's Adventure's Dark & Deep prominently displayed near their D&D / Pathfinder section. Maybe as time goes on we can get other OSR games there as well.