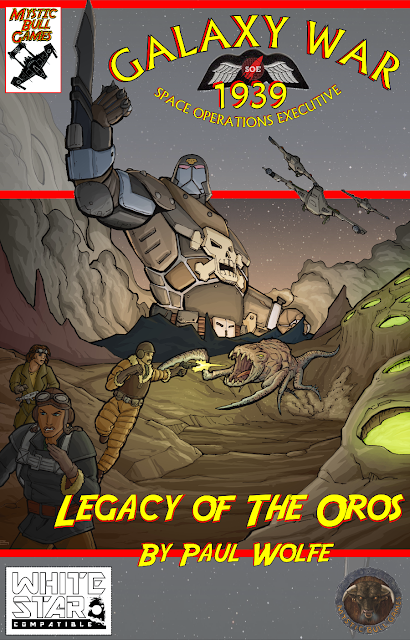 Today's Deal of the Day is Galaxy War 1939 - Legacy of the Oros, an adventure for the White Star RPG.


It’s 1939. You’ve been sent by the Space Operations Executive to recover a mysterious doctor, shot down behind enemy lines; only these battle lines are far from home.

On Churchill IV, the Deutschstern Reich keeps order over its new conquest with Kriegstier, vicious alien predators gene-built to root out partisans in the planet’s highlands. And something else lurks in the broken hills: An alien intelligence bent on escape!

Can you find the doctor before the Kriegstier and the Nazi Raketekommandos find you?
This is a White Star (TM) RPG Compatible Adventure for character levels 1-3.

What will you find inside? Genetically modified alien predators, Nazi rocket men, intrigue, betrayal, and the mysterious Oros -- a sleeping entity from the beginning of time that seeks new disciples in its quest for domination.