Before I get into Sean (now doesn't that sound awkward?) I'd like to highlight that ENWorld is indeed continuing to prominently highlight when a post is sponsored. Which is a good thing. Heck, this week's Sponsored Post was posted by none other than Sean Patrick Fannon (SPF) himself. Take a looksie: 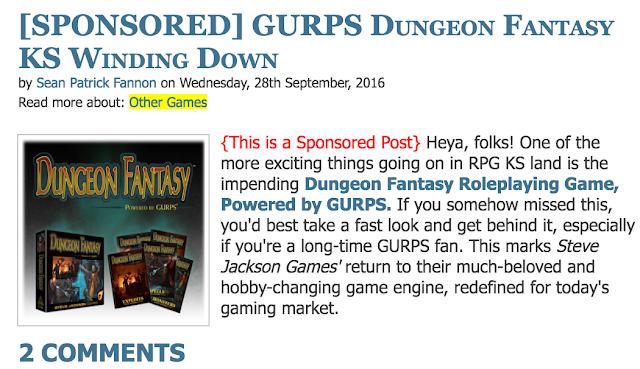 So, its obvious that Sean understands the conversation that has been going on about disclosure, advertising and affiliate links. I mean, he is the one that inadvertently got the discussion started for us with this piece of wisdom: 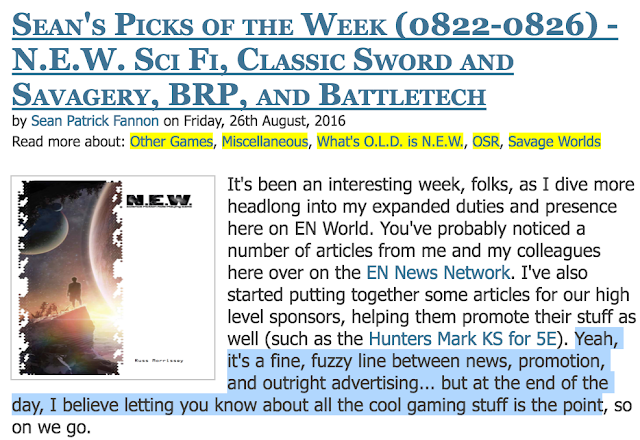 Why is it then, that Sean, obviously under pressure, included such a disclosure on his weekly posting right before ENWorld went down and lost 4 1/2 month of posts (including the one in question) and since resurfacing hasn't disclosed?

Simple. He was trying to get rid of the negative attention he himself had generated. He put himself in a corner and had to find a way out. By posting the above, he figured he had. When ENWorld lost 4 1/2 months of posts, he saw his chance to wish it all away. Because without the above screenshot, it never would have happened.

If it seems that I am insinuating that Sean doesn't appreciate his readers, he most certainly does - as a revenue stream. You see, when ENWorld was offline for those days, Sean's affiliate referral monies nearly disappeared. Now I'm sure in Sean's mind that drop in revenue was due to the disclosure of his affiliate links. Folks simply didn't want to feed his family. Or at least, that's the excuse he's telling himself. ENWorld being offline had nothing to do with it.

My personal experience is that disclosure, disclosure as full as humanly possible, results in a noticeable increase in revenue for The Tavern. Maybe my readers are simply better than Sean's (well, I know they are ;) but I truly believe that folks prefer honesty and openness.

The Tavern existed before there was significant monetary support from the community. It would still exist even if that support were to cease. Your support allows me to devote time to gaming projects, post excessively, be a burr against the skin of those that have taken advantage of the gaming community and, most importantly, justifies devoting my time in retirement to the community and not some time filler of a part time job (yes, you effectively keep Rach happy.) Heck, starting next year you may see us at more than one Convention. Not because I'll be a Guest (thanks Sean for bragging about that today) but because I want to get out and meet more of The Tavern's Community - and game! Your support will make that happen.

Thank you all for your support. Without you, there is no community. Without the community, there would be no reason for The Tavern to exist.

edit: Sean discloses his affiliate link usage at his own site, which makes his failure to do so at ENWord ever more perplexing