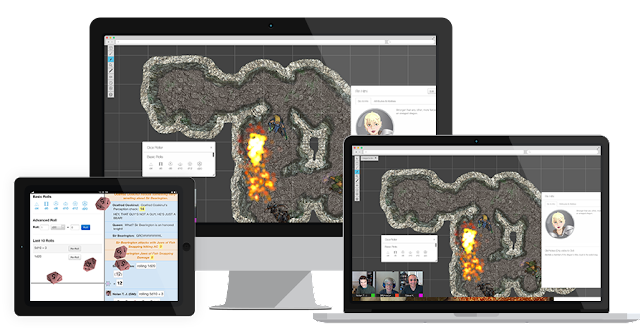 Roll20 (and Dungeons & Dragons 5e) have a nice article up on Slate.

Gail couldn't have timed her licensing of Gary's works better if she had had a crystal ball...

Here's a small piece from the article:


But if technological developments partly supplanted D&D’s appeal, they may yet also contribute to its recent resurgence. The leader here may be Roll20, a web-based system that attempts to re-create the experience of classic pen-and-paper gaming—not just for Dungeons & Dragons, but for other titles as well. The sophisticated application creates a shared platform for many of the game’s fundamental elements, allowing users to simulate dice rolls and move character and monster tokens around maps (drawn by the game master or imported from the community-generated library).

Though it’s not quite the same as sharing a pizza in someone’s basement while fumbling for your lucky 20-sided die, it comes surprisingly close. Log in and you’ll be given the opportunity to create a new game or join one in progress. Take the former option, and an array of tools in the sidebar will allow you to draw maps, place monsters, and otherwise prepare things for your players. It’s simple enough to draw a crude map on one of the graphing paper–like templates, but members of Roll20’s community also create and distribute more sophisticated art resources through the site’s marketplace. A shareable URL lets others join the game. Once they do, their faces will pop up in video streaming boxes in the lower third of the screen, offering something like face-to-face interaction.

It seems like there is hope for the hobby yet.