Rant - Your Gamebook is NOT a "#1 Amazon Bestseller"

One thing the OSR is usually good about is hype, or lack there of. Even out best selling products do so by word of mouth, not manipulation of truth.

So things like Arena Fighters (Rule Book) from M. R. Mathias really piss me off. Why? Here's the screenshot at DriveThruRPG:

Look Ma! It's a #1 Amazon Bestseller! It must fucking rock!

So, it went up on OBS August 10th, 2016. That's yesterday. When did it go up on Amazon to make the bestseller list? 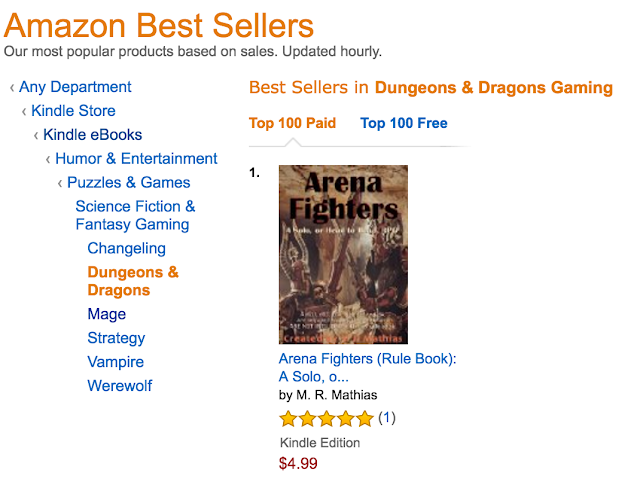 That's it. Its the only book in the category.

Its 2 of 2 in Changleing. How it dropped there, no f'n idea.

So no, asshole, Arena Fighters is NOT a #1 bestseller. Its in a category unto itself.

Is the author prolific when it comes to Kindle Fantasy Fiction? Yes.

Is he awesome? Just read what he has to say about himself:

Eh, might be hard to read as a screenshot:

M.R. Mathias rose from unknown to award-winning, best-selling author at a pace most authors can only dream about. He is a prolific writer of epic fantasy novels, novellas, and short stories. Despite his busy writing, publishing, and promotional schedule Mathias continues to aid his fellow indie authors by posting about their books at Twitter and Facebook etc.

He shared his considerable knowledge of self-promotion in publishing The First Ten Steps. The book has become an important indie guide for navigating the often murky waters of using social media sites to get your eBook in front of avid readers.

I can't speak for his fiction, but his first gaming release on OBS is a social media fail.