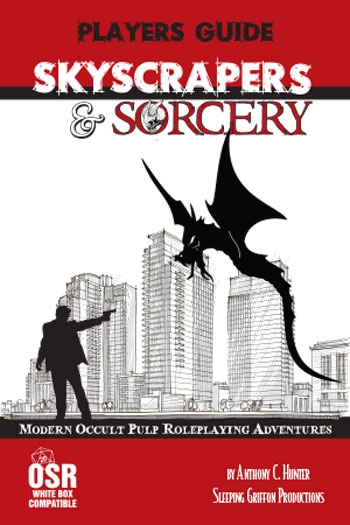 I almost missed this. Yes, this week has been full of distractions.

The Skyscrapers & Sorcery White Box Rules Players Guide is the player's side of the Skyscapers & Sorcery rules. Lots here to use in your OSR campaign if you enjoy taking your fantasy further afield.

It’s been several decades since the Event and you have decided that it is time to scratch the itch of Adventure. Welcome to Skyscrapers & Sorcery, may your adventures be many and fruitful and may your lives be valiant and your death be bravely faced.

This contains all of the player pertinent information, everything from the core book except the Referee's section and the starting adventure.

Email ThisBlogThis!Share to TwitterShare to FacebookShare to Pinterest
Labels: deal of the day, OSR, white box