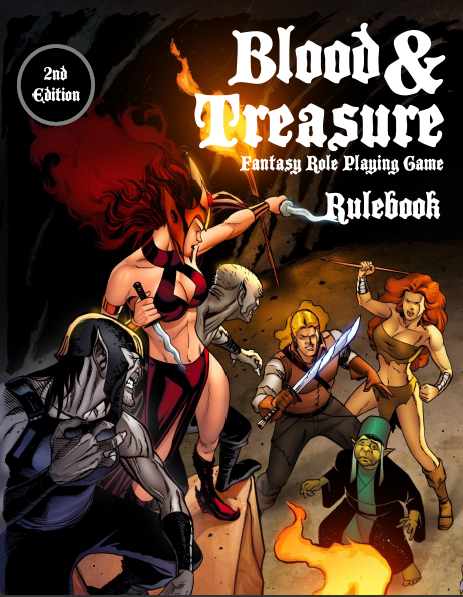 Blood & Treasure 2nd Edition was released into the PDF wilds earlier today and there was much rejoicing.

+John Stater , well known for his NOD magazine and Hex Crawls releases under the Frog God Games banner, has completed revising his OSR ruleset, Blood & Treasure, to it's 2nd edition.

Here's what John has to say:


Blood & Treasure is the fantasy role-playing game for people who want to spend less time arguing over rules and more time playing, and the new 2nd Edition continues this tradition.

Compatible with old school games, it strives to be rules lite and options heavy.
You get ...

Blood & Treasure doesn't want to tell you what kind of fantasy game you should enjoy, it just wants to put all the tools in your hands and let you play YOUR GAME, YOUR WAY.

The PDF is 10 bucks with a POD release in the near future.

Email ThisBlogThis!Share to TwitterShare to FacebookShare to Pinterest
Labels: blood and treasure, OSR