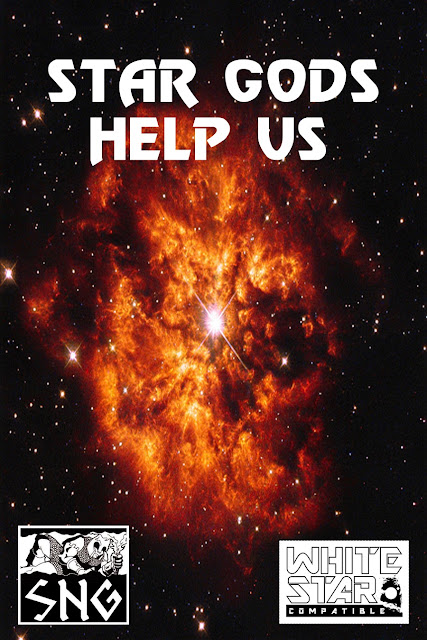 The "Other Spahn" ( +Pete Spahn ) has officially stepped into the White Star universe with Small Niche Games release of Star Gods Help Us.

Now, while Pete describes Star Gods Help Us as "a lighthearted collection of new White Star™ classes for that one player who just has to be different. It contains twelve (12) quirky race/class combinations including giant cockroach junkers, spiritual mammoths, living oozes, malfunctioning lawbots, zombie crewmen, and other bizarre creatures that will leave you shaking your head." I see it in a slightly different light.

Quite simply it's 12 unique NPCs that a DM can pull out of his ass at a moments notice. These race / class combos have enough depth and individuality right out of the box that they simply ooze "sandbox" play.

Imagine throwing in a Gloop when the party needs some repairs to their ship:


Gloops are a race of intelligent purple oozes with a "face" that consists of white "googly eyes" and a wide mouth. A Gloop typically appears as a shifting blob that stands 4' tall, but can flatten itself out to a height of 6". A Gloop's overall mass weighs approximately 160- 300 pounds. A Gloop is capable of forming up to six pseudopods in order to wield weapons or manipulate small objects. A Gloop can move its "face" to any of these pseudopods in just one round. 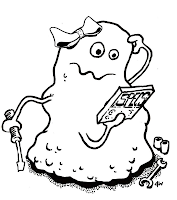 Gloops are asexual, but some adopt male or female traits and preferences in order to fit in with other races. Gloops are vegetarians that feed through osmosis. They love spicy plants, but these plants often give them gas.

MECHANICAL UNDERSTANDING: Gloops have a natural understanding of all things technical and mechanical, and their ability to creep into narrow places makes them excellent mechanics. At the Referee's discretion, they may receive bonuses or increased chances of success when dealing with vehicles, starships, and other large machinery.

Thats just a small piece of the Gloop's write up. Just think, there are eleven other race / class write ups included.

All that for $2.99. Simply a bargain for those looking to add some surprises to their White Star campaigns.

Only thing that annoys me is that I won't have the time to kick off my own White Star campaign for about six months. Ah well, six more months of source material releases to pick through before then ;)
Posted by Tenkar at 7:08 PM