Playing Around with "Ascan" Pocket Monsters, Creatures and NPCs 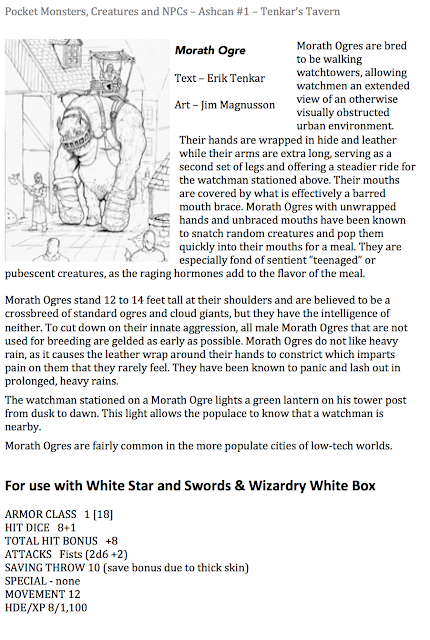 So, in addition to the Pocket Settings I've been working on, I've also been writing up monsters, creatures and NPCs for the use with White Star and Swords & Wizardry. I've been trying to think of a reward for my backers on the Patreon side of things, and I think I've found a fun way to do it.

Backers at $1.50 or higher will get at least one four page PDF each month - it will be either Pocket Monsters, Creatures and NPCs or a Pocket Setting of four or eight pages. Backers at $4.50 or higher will get a printed copy mailed to them each month (it will be a booklet sized one-sheet - 4 pages on one folded sheet - I need to check on international shipping and may need to add 50 cents or a dollar to the print level for those outside the states.)

Sure, the above layout sucks - but it will only get better as I practice ;)

Everything in the "Pocket" series of ashcans will have been posted previously at The Tavern. I'm just making it easier to refer to for those that toss a few coppers in the tip jar.

I'm considering releasing a a low cost PDF collecting the "Pocket" whatevers one or twice a year, but I'll cross that bridge when we get there.

Consider the above screenshot to be a placer for now. I need to ask +Jim Magnusson if I can use it in this way ;)
Posted by Tenkar at 7:48 PM