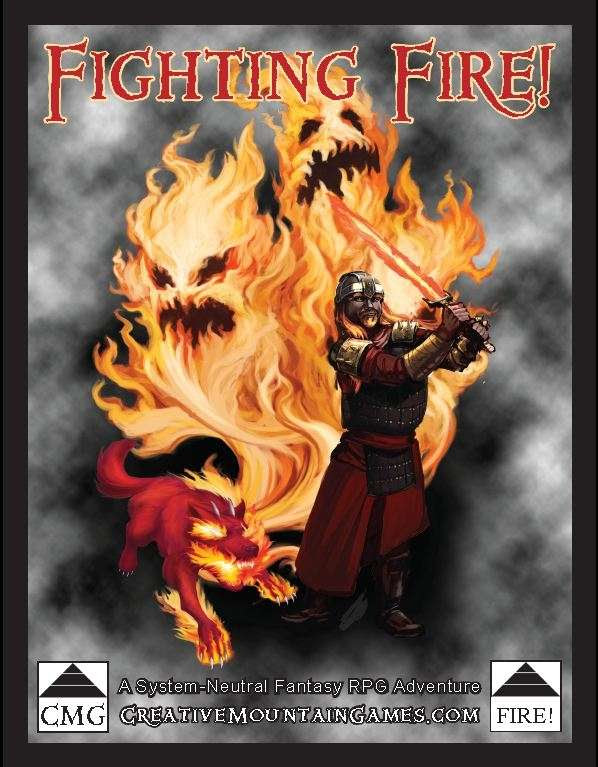 In case you missed it, +Mark CMG (Creative Mountain Games) has written and released Fighting Fire, a system neutral fantasy RPG adventure as a benefit for +Ernie Gygax , who suffered significant losses last February due to a fire at his home. 33% of the proceeds are going to a fund (the Ernie Gygax Fire Relief trust Fund) to help Ernie get back on his feet financial, which in an of itself is a good cause. Of course, as a community, we do pretty well coming together for good causes, so on that level, Fighting Fire should be a no brainer ;)

Still, you probably want to know how the adventure itself is. Actually, it's pretty good. For me, they highlight is reading all of the in jokes and references to folks from the hobby. There are more than a few I don't know, which is a challenge I need to meet. Almost like a game within a game.

Fighting Fire is a bit of setting and a lot of adventure. Mark wisely leaves room for you, the DM, to pencil in the needed stats for the creatures your party is to encounter. As the monsters include will-o-the-wisps, ettins, fire giants, hell hounds and the like I could nearly stats this out from the AD&D 1e DNA burned into my brain 30+ years ago. Heck, your players don't even need to kill everything! Yep, negotiation is actually an option :)

The map of Gamington is awesome (as is the overwhelming majority of the art pieces). Even if i don't use the adventure anytime soon, as it's certainly too high for my party of 3rd to 5th level S&W PCs, I can see myself using Gamington now.

Would I have preferred seeing stats, even if they were "generic OSR" in nature? Probably, but as I stated above, I know most of the stats by heart anyway. God, I'm such a classic gaming nerd ;)

(don't forget to read the sample PCs in the back - I can only identify about a 3rd - need to use google-fu!)

Our friend, Ernie Gygax had a tough 2013. Early in the year a fire destroyed his apartment including many irreplaceable belongings. Later in the year he was laid low with a bout of congestive heart failure. This system-neutral adventure was inspired by some of those events and the storied history of gaming. 33% of the price is set up to go to the Ernie Gygax Relief Fund set up by his brother Luke Gygax. The adventure takes place in and around the town of Gamington on the shores of Gentle Lake. An arsonist's fire destroys the Tower of Ernesto, a famous wizard, but a band of heroes rallies to right the wrong, rooting out the evil in the nearby Fire Peak. A GM can set this up as a campaign addition or one-shot, in any Medieval Fantasy RPG system. There are plenty of tips to help do either. Included are some character backgrounds for the heroes noted within as well as an epic poem extolling their exploits. I hope it is as much fun to read as it was to write.