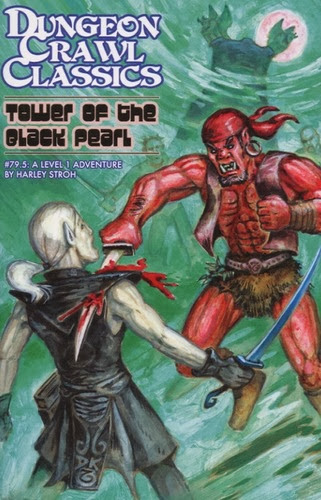 No, I didn't run the DCC RPG version of the Tower of the Black Pearl by +Harley Stroh last night - I ran the 3x version from DCC #29, converted on the fly for Swords & Wizardry Complete.

In summary - it was a blast!

What follows is loose recap of the night's events. I'll be skipping over much, as I doubt very many want a play by play of the events. Still, if you plan on being a player in the adventure at some point, you probably shouldn't read what follows. I do not know how close the DCC RPG version follows the older 3x version, but I suspect they are fairly close.

The party got hired by a merchant to recover The Black Pearl from a tower 5 miles off shore tat is only accessible one night every 10 years. Needing a job, and with a decent amount of cash being offered, they accept the job.

Upon arriving, they notice there is already a boat moored to the tower. They investigate the boat, bumping their's against it, waking pirates up above in the tower. The party thief takes a crossbow bolt immediately taking him to zero HP. The party mage moves to stabilize him (with no cleric in the party last night, I allowed the thief to return to 1HP after the combat thanks to the mage's action). Next round, a sleep spell followed, taking out the three pirates. The mage then attempted to charm on of the pirates after the other two were dispatched. The pirate was too drunk to follow the party, although he did find the eleven mage extremely attractive. Yet another reason we don't do "Hangouts on Air" ;)

I had decided to add a Potion of Extra Healing to the loot of the first encounter once I realized the party was going to be healer-less. I'm glad I did.

With some experimentation, the party figured out much of the lore of The Candle Room. They even restored six dead heroes to life. A good deed, even if it's effects were to be short lived - literally.

Some good critical thinking enabled the party some significant bonuses to their remove trap rolls - the traps in the Tower of the Black Pearl are lethal as all hell, and perhaps excessive for a 1st level party (especially with the small chance to succeed that a 1st level S&W character gets). The water room trap nearly nailed them before the party dwarf removed a door hinge with a crowbar and a natural 20.

The portals were a nice touch. They really made the party think and experiment. Fun stuff to say the least.

The Ferryman was immediately recognized from real world mythology, and the players acted appropriately - I suspect I would have fucked this part up if I had been a player in the session and not the DM.

The combat that presented itself worked well. I'm actually very happy how my Luck Houserule played out - it added excitement without being game breaking. When the reroll succeeded, there was much rejoicing, and when it failed the was much laughter - win win if you ask me.

As for the final scene? The found the Black Pearl and revovered it - leading to a mad rush to the top of the tower and their skiff as the tower flooded behind them. When the Candle Room was extinguished, I told them it was similar to the scene in Star Wars when Alderan was destroyed - there was "a disturbance in the Force".

The party members got to roll 1d4 and add it to their permanent HP total. They also found out upon returning to shore that some of the leaders of the Thieves Guild had apparently died of food poisoning, the local Mage's Guild burned down, town leaders were missing and other assorted goodies. I did limit the effect to a 250 mile radius, as this is the Wilderlands and it's a mighty big world. Still, evil is not stupid, and the effects of the missing heroes will be felt immediately.

There was excitement in the group that I hadn't sensed for a while. General excitement, not just the rush that hangs on the latest crit. It was fun and the time flew by in a mad rush. There is something to be said for the simpler RPG systems - they easily find their way into the background and let the play take over.