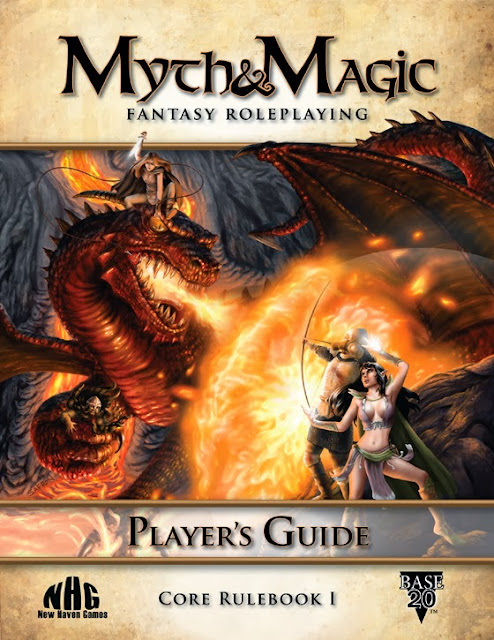 Time to put a fork into the Myth & Magic Player's Guide. Tom (I hope you don't mind referring to you as "Tom" and not Mr. Ryan" or something, but at this point, I feel we have a relationship) has done the big "fuck you" to those that supported his project.

You've strung folks along along for over a year with pictures and promises, but in the end you are as empty as you "company's" homepage. Yes, you know how important the customers are when the homepage refers to Tom's second Kickstarter (for the GM's Guide) as "Coming Soon" when it finished funding in October of 2012. If you can't bother to update your own homepage in a fucking year, you are pretty much telescoping your priorities (hint - it ain't anything coming from New Haven Games, unless it's money changing from the company account to Tom's private account).

So, in any case, Tom said he shipped stuff out on September 26th (this is after the books spent time in a storage facility - allegedly):

So, there is a 99% chance that your shipment is coming and will arrive within 14 business days, UNLESS a) you're international and didn't follow the updated shipping cost instructions (there are a lot of you and I will be emailing you); or b) you ordered a softcover PSG (which I've ratcheted up to a softcover PG) or c) hahaha! fuck you! fooled you all - 100% get ZERO deliveries! Tom is such a naughty boy!

The first softcover PG printing proof was just wonky. The second one was better and it's approved. I'm awaiting a shipment of them. Tracking says Monday the 30th.

I'll come back in a few weeks to give you another update on this.

As for the rules expansion. I've uploaded a new one HERE!!!!

It includes all the new races and two new classes. I'll keep this in beta for a little while, because some of you are undoubtedly waiting for the books to start really digging in. After we think we have all the comments we need, we'll edit, lay art and release as a finalized rules enhancement.

Thank you all again for your continued support and patience. I've gotten a lot of more positive emails over the last few weeks. (well, I suspect the ratio has been different over the NEW last few weeks)

Yours in the Game,

It's a shame too. The rules are decent. The PDF isn't bad (especially when Tom finally removed the damn password protection)

Now, if you read the public comments on the Kickstarter page, one of the supporters has left a small gift for the public. Not sure how long the link will last, but I'd hate to see someone put money in this fucktard's hands for a PDF of a game that died before it arrived. Can you Pirate from a Thief? Almost sounds like class warfare.

Oh, read Redwulf's post over at the New Haven Game Forums - spot on!
Posted by Tenkar at 10:20 PM