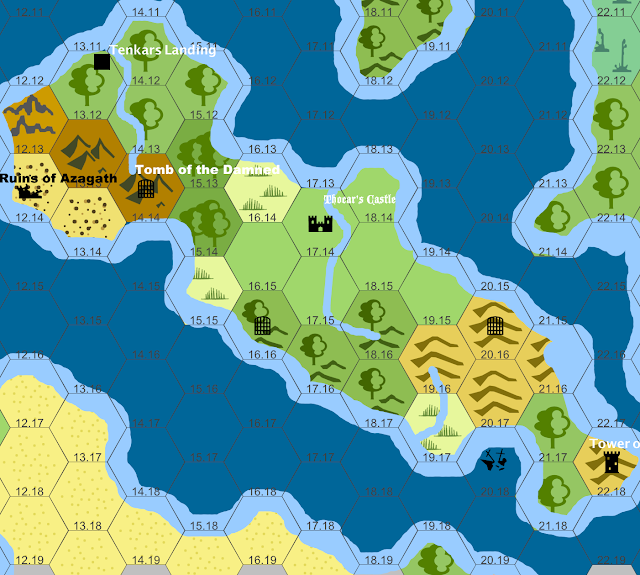 This is a "non-gaming" weekend at the Tenkar household - I figured folks in my gaming group would either be guests for the weekend or receiving guest for the weekend, and I was right. So, in addition to getting ready for the guests we are receiving tomorrow for the Easter Holy Day I'm also working on some gaming thoughts.

Like - "What's going to inhabit the world that Tenkar's Landing exists in? What kind of monsters, natural and unnatural creatures, humans and nearly humans are my players going to find?"

For a Swords & Sorcery flavored Swords & Wizardry / Crypts & Things campaign, I think the idea comes down to one that is found in the DCC RPG as well LotFP's Weird Fantasy - the best monster is a unique one.

Not that ALL the monsters need to be unique, but enough of them need to to actually make all monsters special. So, there might be a whole tribe of cannibal veggipygmies, but only one Queen Rosatunda, Immortal Progenitor of the Veggipymies of the Ruins of Azagath. Kill her and the tribe will die out. Let her live and at some point in time, the Veggipygmies may over run whole island.

So, i want to go through both Monstrosities and Tome of Horrors Complete, find monsters that will fill the range from common (skeletons, giant rats w/ 2k coppers, wolves) through unique (as above) and the world in between.

There are no demihumans or humanoids by default, although most humanoids could be brought in reskinned as primitive humans or magically warped ones - but they would be localized - none of this "a goblin behind every tress and an orc in every cave" bullshit ;)

As a side note, the OGL'ing of Dwimmermount leaves room for a Swords & Sorcery style conversion of the megadungeon...
Posted by Tenkar at 9:33 PM