Quick First Impressions of Empire of the Petal Throne 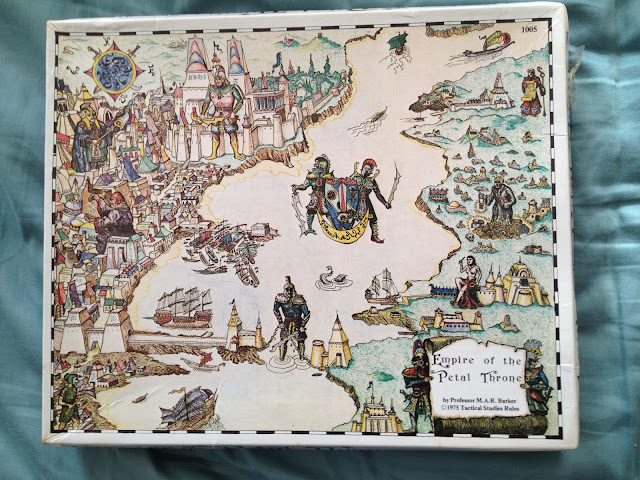 1 - It reminds me of DragonQuest (SPI) and other RPGs that were put out by primarily Wargaming companies, as it has numbered sections and subsections.

Example: Hit Dice, Combat and Damage Dice is #700, Hit dice Follows at #710, Combat follows at #720 and Use of Weapons ans Weapon Types follows at 721 (as it falls under Combat)

2 - Boobies. The art has boobies with nipples and such, but comes off looking like "artsy" art, not "fantasy" art. So, this isn't you Succubus from the MM type art ;)

3 - More on the art- It's vert "atmospheric" in a non-fantasy way. I'd compare it loosely to the art in Spears of the Dawn, which is African in type and not standard fantasy.

4 - The maps are individually priced at 5 bucks a pop - more than half the $27.50 asking price of the game box itself. Heck, the rule book alone was $12, which was more than the OD&D Boxed set.

5 - I'm going to need to find a way to ignore all this fancy language shit - if I had trouble learning a real second language in college, it certainly isnt happening in an RPG.

6 - At first glance it looks to be better organized and edited than the OD&D Boxed Set, but I'll see if that holds up with closer reading.
Posted by Tenkar at 9:34 PM

Email ThisBlogThis!Share to TwitterShare to FacebookShare to Pinterest
Labels: empire of the petal throne