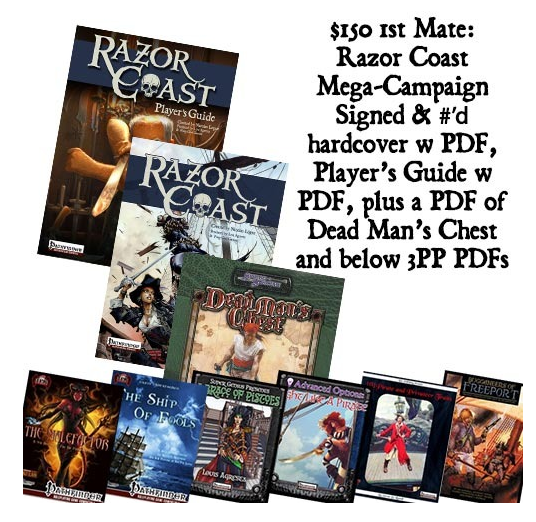 Just like Paizo / Goblin Works is trying to do with the Pathfinder MMO, so too is the Frog God with the Razor Coast - stuff in more PDFs to get people to purchase the (possibly) over priced core product.

What do I mean?

16 days in, 15 days to go and still $22k or so to hit the funding goal. I suspect Frog God didn't expect it to take this long, or else they wouldn't be tossing a number of Pirate Flavored Pathfinder PDFs in an effort to chum the waters.

There is a built in premium on Razor Coast, both to fulfill preorders that were taken years ago, and to pay for artwork that Logue had commissioned - the PDFs are there to add some value to the current $110 and $150 pledge levels. BTW, the added PDFs are solely for Pathfinder - you'll get them with your S&W version, but they wont do you much good. So in truth, the added PDFs are pretty much there to bring in more Pathfinder players.

Maybe they are expecting to pick up Pathfinder pledges when the Pathfinder MMO Kickstarter fails to fund?

Hey, they even added Frank Mentzer to the mix now and mention his work on the Emerald Spire MMO  Megadungeon that is attached to the Pathfinder MMO Kickstarter. See, there is a pattern ;)

Personally, I think Frog God overestimated the following The Razor Coast fiasco has had over the past couple of years. Do I think it will hit it's $75k goal? Probably, but that will be due in large part to the Pathfinder MMO refugees that were just supporting it for the Pathfinder RPG loot anyway. Out of $650k or so of pledges, I think Frog God can pick up $22k. I guess we'll know in 5 days...