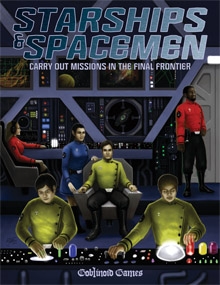 Starships & Spacemen is Goblinoid Games' Star Trek / Labyrinth Lord mash-up. In theory S&S is a 2nd edition, it's previous edition having been printed in 1978. The reality is it's a new game, building upon the LL chasis but using the tropes and setting from the original game.

I have some mixed opinions of the game. It's not bad at all, as the LL chasis is a good one to build off of. You could easily gather your own Star Trek type command crew and have them adventuring in no time. Assuming you can get past the typos. They are there and they are many.

The typos aren't a game killer, but they are annoying when they are giving the average C&C rulebook from the early printings a run for the money. I got my softcover copy via the Indiegogo funding. $25 for the print and PDF.

As it currently stands, there is no print on demand copy of the rulebook available on RPGNow - the PDF is $6.45.

Personally, I wouldn't purchase a print version (when they become available) until they clean it up. At least with the PDF version, you get an updated copy if / when they get around to it.

It's a fairly thin set of rules coming in around 94 pages, and 5 pages are wasted on drawings of "Forehead Aliens" (can we say "filler"?)

I want to really like S&S. There is a lot to like but it also feels like there is much missing. Maybe there is a plan to add an "Expanded Missions" sourcebook or the like. The amount of support this gets will certainly effect it's long term worth.

God, I'm really waffling on this. I like it "but" is about the best endorsement I can give it at this time.

Boldly explore the galaxy in search of alien civilizations! You take the role of a Military Officer, Technical Officer, Science Officer, or Enlisted Man in the Galactic Confederation. Travel in a starship under your command, on missions of first contact, rescue, exploration, and more in a galaxy full of hostile aliens. Try to maintain the tenuous truce with the militaristic Zangid, and fight the Videni who may look like your Tauran allies, but do not adhere to a philosophy of peace and logic.

Rules for spaceships and exploration

Email ThisBlogThis!Share to TwitterShare to FacebookShare to Pinterest
Labels: review, starships and spacemen