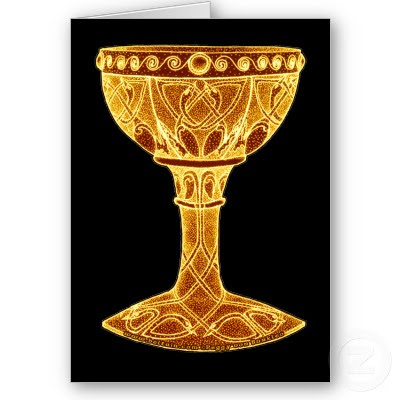 This chalice is a lawful holy relic. In the hands of a Lawful Cleric, it adds +2 to Lay on Hands spell check attempts IF the the target is Lawful. It adds +1 to the check if the target is Neutral. It has no effect if the target is Chaotic. It’s most special ability is obvious when it it used by a Lawful non-cleric.

In the hands of a Lawful non-cleric, it allows that character to attempt to Lay on Hands once per day. The spell check is adjusted by the character’s Personality modifier and a +2 from the chalice itself. There is no adjustment for the character’s level. Whether the spell check succeeds or fails, no further checks may be made until the next day. A natural roll of 1 requires the PC to roll on the disapproval table and he must comply with the results if he desires to use the chalice again.

St. Betran’s Holy Chalice first appeared amongst the Dwarven Clans, often as a reward to a great hero that furthered the goals of the Patron St. Betran. No more than one has ever been awarded to a specific clan, and over the years a few have been lost to the outer world, either by clan extinction, individual foolishness or theft. All dwarves recognise a St. Betran’s Chalice on sight and will assume the possessor to be a thief if they are not themselves a dwarf.

(If you wanted to use the chalice in an OSR styled game, change it's power to Cure Light Wounds once per day / Cure Disease once per week - usable only by good characters, healing power does not effect creatures of evil alignment).