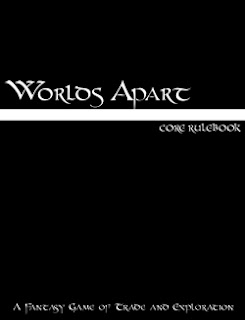 Maybe you remember me posting about Worlds Apart over the weekend - I did. It is currently reside in the Free Game of the Week spot on the left side of this page, so consider this a reminder if your haven't already grabbed a copy.

What is is? A fantasy RPG on a water based world with the Traveller OGL rules as the engine. Pretty neat.

Four islands composed the sultry chain, floating upon a bright blue sea under a tropical sun, each island gradually decreasing size as the eye passed from north to south. They were mountainous, etched with deep valleys, and covered with lush foliage. Greysolt surveyed the chain as best he could with his spyglass, taking the longest time upon the southernmost island, covered in a hazy steam of warm clouds. The crew of The Dromedary remained silent as the Captain surveyed what no other voyagers had ever seen. Each held different thoughts in the silence: thoughts of receptive natives, thoughts of fresh water and fresh fruit, thoughts of spices unknown to the civilized world, thoughts of slaughter and pillage.

Welcome, traveler, to Worlds Apart! Brave the Forever Sea in a fantasy game of trade and exploration. Take the role of soldier or sailor, entertainer or scholar, dweomercraefter or drifter. A thousand thousand islands populate the world and riches, adventure, and danger lurks upon every shore!
Posted by Tenkar at 6:55 PM

Email ThisBlogThis!Share to TwitterShare to FacebookShare to Pinterest
Labels: Expeditious Retreat, free game of the week