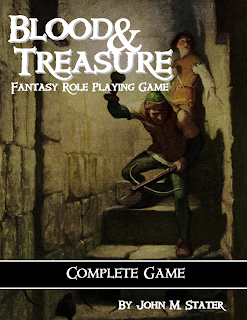 I bought Blood & Treasure Complete (Player's and GM's Books rolled into one) the other night, as I had both a Lulu 20% off coupon and a desire to see what John Stater, he of the Land of Nod setting, was going to put together as an OSR RPG. Besides, he was offering the PDF for free to those that purchased the hardcover copy. Win - Win if you ask me.

So far I'm impressed. I don't agree with everything John has done with Blood & Treasure, and I'm not sure I'd run it as is (do I run anything as is?) but it appears to be a tight set of rules that are easily houseruled. I dare say they were built for houseruling.

Blood & Treasure draws deeply from earlier editions of D&D, but it's not afraid to also draw inspiration from D&D 3e (such as with the optional Feats he's included, but I'll probably touch more on that with a later post).

The classes seem like fun to play (and higher level assassins even get spells). Heck, there's even a Bard class included - and if you know me, you know I love a flexible Bard class.

I have a minor issue with the layout - it only effects the class section, and I understand why it happens. Sometimes, class descriptions get broken up by the full page spread of the following class's base info / character portrait. I understand why it is done - to avoid lots of white space, but it breaks up the flow while reading.

I do like the Spell section. Spells descriptions are, for the most part, short and to the point. Easy to reference. Much like the Monster section - easy and quick to reference.

I'm still working my way through the PDF (which is surprisingly readable on my 7" Google Nexus tablet held in the vertical positon) but I like what I see so far. I also need to go back and reread by Swords & Wizardry Complete PDF at some point, as it might become the standard currency of the OSR after Reaper's Kickstarter ;)
Posted by Tenkar at 9:59 AM