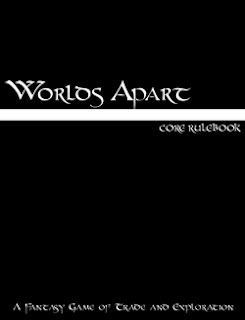 Joe Browning has released Worlds Apart, a Traveller "Powered" RPG. Unlike many of the games using the OGL, which are D20 based, Joe went with OGL Traveller to build his latest game's engine.

At it's simplest, its a fantasy themed pirate RPG setting, with Dwarves and Elves (no halflings or gnomes - the shame). Well, actually not pirating, but I could see privateering happening in the setting.

AS far as I know, this is the first game that isn't Traveller using the Traveller game engine, including careers and tours (and possible death) during character generation. For this reason alone I want to give it a try.

I'm working my way through the paid with art version of Worlds Apart, and I like what I see so far. I need to see how well he's integrated magic spells ("Talents") into the Traveller engine. I'm very intrigued. I'll review it when I'm through the rules, but I wanted to bring it to your attention, especially with the free version of the Worlds Apart rules being released (and practically the whole art free package being released to the OGL) alongside the paid.


Four islands composed the sultry chain, floating upon a bright blue sea under a tropical sun, each island gradually decreasing size as the eye passed from north to south. They were mountainous, etched with deep valleys, and covered with lush foliage. Greysolt surveyed the chain as best he could with his spyglass, taking the longest time upon the southernmost island, covered in a hazy steam of warm clouds. The crew of The Dromedary remained silent as the Captain surveyed what no other voyagers had ever seen. Each held different thoughts in the silence: thoughts of receptive natives, thoughts of fresh water and fresh fruit, thoughts of spices unknown to the civilized world, thoughts of slaughter and pillage.

Welcome, traveler, to Worlds Apart! Brave the Forever Sea in a fantasy game of trade and exploration. Take the role of soldier or sailor, entertainer or scholar, dweomercraefter or drifter. A thousand thousand islands populate the world and riches, adventure, and danger lurks upon every shore!