Games From the Basement - Amoeba Wars 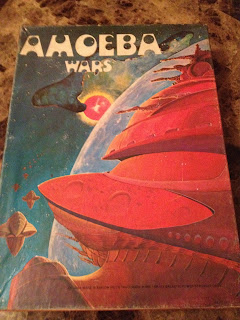 When I think of "beer and pretzels" gaming, I think of Amoeba Wars.  If my memory serves, it was playable with 2 to 5 players (but 4 to 5 was best).

It was simple.  Not Monopoly simple, but pretty basic, as the rules took up less than 5 pages.  You had starships and dreadnoughts, and got to fight abstracts space battles on an abstract star map and attempt to keep you people alive, from both opposing players and those damn Amoebas.  They could spread like a fuck'n space cancer when they got going.  The amoebas, not the other players ;) 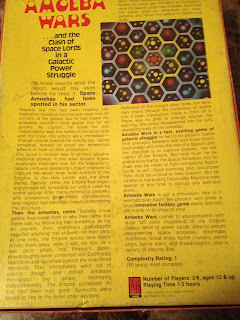 It also played fairly quickly too, usually in less that 2 hours.

Yep, this was one of our non-rpg go to games (along with Chaos Marauders and Talisman).

It was part of Avalon Hills "bookshelf" series of games, as it's box was made to sit on a bookshelf and be readily identifiable from the side panel.